Arsenal come out fighting to brush Manchester United aside 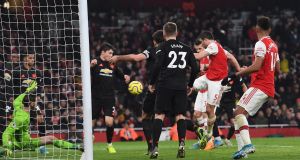 Mikel Arteta has his first win as the Arsenal manager on the back of a dominant first-half performance against Manchester United and, if there is a distance to cover before past glories are recovered, it is at least a start; a small step in the right direction.

Arsenal had kicked off in 13th place in the Premier League, four points above the relegation zone, and everybody knew another home defeat would have made it four in a row – admittedly not all of them on Arteta’s watch but it would have equalled a club–record low.

Arteta has advised supporters not to look at the table, merely to judge the performances but it does look a little less gloomy now, with the team back up into the top half. Moreover, the performance was good, even if it came against a United team who had travelled without their attacking instincts.

Arsenal might have scored more in the first-half but as it was, the goals from Nicolas Pépé and Sokratis gave them more than enough to defend after the interval. United had arrived in decent form, their confidence up and it was a big chance for them to close on fourth-placed Chelsea, who had drawn at Brighton earlier in the day.

The game felt well set for them, given their preference to sting on the counterattack against teams who play on the front foot but they simply never got going. Even in the second-half, when they had the territorial advantage, they struggled to create too much of clear-cut note. For United, it had to be filed under bad days at the office.

Arteta has demanded intensity and his team started positively, just as they had done against Chelsea on Sunday. Once again, they took an early lead and it was a big moment for the £72m record signing, Pépé, who profited from close-range after Sead Kolasinac’s low cross had flicked off the inside of Victor Lindelöf’s heel.

United wanted an offside against Kolasinac, who had collected a pass from Pierre-Emerick Aubameyang, but VAR confirmed the left-back was level. Pépé’s fifth of the season, steered left-footed past David De Gea, was neat and it represented a shot in the arm for Arsenal, who had been devastated by Chelsea’s late comeback win.

Arteta had said he was worried how the result would affect Arsenal. Shortly afterwards, Pépé showed his quick feet when he got past Luke Shaw before checking and beating him again. His cross invited a spectacular scissors-kick from Aubameyang, which flew high.

This was once the fixture of the Premier League season but a glance at the league table told its own story. Those clashes, in which players such as Patrick Vieira and Roy Keane were prominent, were frequently underscored by spite and there were bits of niggle in this one, the tone set when David Luiz went through Anthony Martial in the first minute.

He escaped a booking but Kolasinac did not when he pulled down Daniel James in the next action. The referee, Chris Kavanagh, was a busy man, ruling on a host of borderline incidents.

Solskjær had been determined to concentrate on the players who were at his disposal but, inevitably, Paul Pogba’s continued absence provided one of the subplots. Apparently, the midfielder has had a recurrence of the foot injury that has wrecked his season, although details of the injury have been consistently sketchy.

Arsenal were the only team to turn up in the first-half, with United passive and sorely lacking creativity in midfield. Their one ploy was to play balls up the channels for their pacy attackers but it was too predictable. Their one chance before the interval was a free header for Harry Maguire on 45 minutes from Fred’s free-kick which he directed straight at Bernd Leno.

Arsenal were 2-0 up by then after a defensive horror show from United on a Pépé corner. Marcus Rashford resembled a statue as Alexandre Lacazette darted in front of the near post to flick on and although De Gea reacted smartly to save, the ball flicked off Lindelöf again and Sokratis Papastathopoulos lashed home from point-blank range.

The goal had been advertised, with Arsenal having tightened their grip from the half-hour mark. Lacazette turned Maguire brilliantly inside the area before toe-poking wide – he had to unload the effort quickly – while Lucas Torreira shot narrowly past the post after tricking away from Fred. United’s sloppiness was reflected by De Gea’s botched clearance, which hit Lacazette and broke for Pépé. He stepped away from Nemanja Matic and curled a shot against the post.

Solskjær could have done with some of Pogba’s ingenuity but with the battle lines drawn between the club and the player’s agent, Mino Raiola, there have to be questions about how much longer he wants to remain in Manchester. Raiola has said United are “out of touch with reality and without a sporting project” a club that would “even ruin Maradona, Pelé and Maldini. Paul needs a team and a club – one like Juventus.”

Arteta had his assistant, Freddie Ljungberg, up in the stands to provide a different perspective, which he says will happen in every game, but everybody could see that Arsenal started to drop deeper from the beginning of the second period. United pushed up into the Arsenal half. Could they find some punch?

Solskjaer swapped the disappointing Jesse Lingard and James for Mason Greenwood and Andreas Pereira, and the latter had a sighting when played through by Matic only to hit the side-netting. That was as good as it would get for United and their desperation was reflected when Aaron Wan-Bissaka tried to win a penalty with a dive. Like his team, he got nothing.