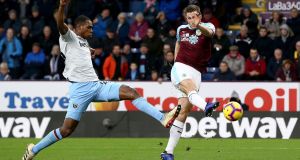 Burnley picked up a much-needed three points with their first win of the Christmas period, not quite managing to climb out of trouble but looking a lot more like their old selves in holding out against West Ham. Sean Dyche dropped Joe Hart and returned to a 4-4-2 formation in the hope of restoring some of the defensive solidity that has served Burnley well in the past.

It seemed to work, in that Burnley kept a rare clean sheet, though perhaps judgment should be reserved until opponents with more attacking conviction are encountered. Tom Heaton was not given a great deal to do in his first league appearance of the season, until he made an excellent one-handed stop to foil Andy Carroll at the end.

This was one of those tepid West Ham away performances that makes one wonder why they inspire such a large and loyal following, even for an early kick off in the north. Manuel Pellegrini acknowledged the support at the cricket club end as he walked to the dugout, but could hardly bear to look as he trudged off at the interval with his hands in his pockets and his eyes on the ground.

By then Burnley were two goals up and good value for it. What definitely worked for Dyche was bringing in 19 year old Dwight McNeil on the left wing, for the teenager was involved in the first goal and opened his senior scoring account with the second. Yet the real star of the show was Ashley Westwood in an uncluttered midfield. West Ham could hardly get near him, except when Mark Noble was lucky to escape with just a yellow card for an ugly over the ball challenge.

Westwood was on the edge of his own penalty area when Heaton left his area to start the move for the first goal with a header to the midfielder. The ball was then transferred up the left to McNeil, then back to Westwood, whose diagonal ball towards the area was headed into Chris Wood’s path by Ashley Barnes. Wood took a touch then slipped the ball past Lukasz Fabianski, turning to Barnes in celebration as if to ask why such a simple routine had not worked out more often.

The lead was no more than Burnley deserved, they could have been in front after a couple of minutes when Barnes anticipated a McNeil cross but put his shot the wrong side of a post. Just after the half hour they increased it and again Westwood was involved, swinging over a cross that McNeil met at the far post for his first Burnley goal.

Pellegrini’s predictable response was to send on second half reinforcements in the shape of Carroll and Grady Diangana, the latter having more of an immediate effect and the former picking up a booking for clattering Barnes. Burnley still had the chance to make the game safe early in the second half when Westwood played in Wood with only Fabianski to beat.

The striker managed to miss the target from close to the penalty spot, though credit for that should go to the goalkeeper who left his line early and forced Wood into a hurried finish. West Ham did improve in the second half, though their first half showing had set the bar very low. Heaton made one routine save from a Carroll shot then tipped his header on to the bar in the closing minutes , otherwise the additional aerial threat was capably dealt with by James Tarkowski and Ben Mee. Performing this effectively Burnley have a chance, though of course they will not get to play West Ham every week. – Guardian service