Leicester inflict second defeat in a row on Manchester City 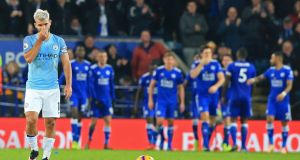 Manchester City’s unhappy Christmas continued as Leicester fought back from a goal down to inflict another defeat on the champions, who also had Fabian Delph sent off. Pep Guardiola’s side thus fell below Tottenham Hotspur to third in table, seven points adrift of leaders Liverpool. The title is a two-horse race? City hope not.

Leicester deserved to add the scalp of Pep Guardiola’s team to that of Chelsea, which they claimed on Saturday. They did so thanks to a superb long-range goal by Ricardo Pereira nine minutes from time. Marc Albrighton had headed an equaliser in the first half, five minutes after Bernardo Silva shot the visitors into the lead.

At first it seemed like this would be a stress-free return to routine for those visitors after Saturday’s shock home defeat by Crystal Palace. It also seemed like Harry Maguire might be the one in for a bothersome day, as the Leicester centre back declared in the match programme that last week’s defeat by Pep Guardiola’s team in the Carabao Cup showed that the hosts could not afford to “show too much respect” to the visitors.

“Hopefully we can learn from that,” said Maguire, adding that Leicester could go “toe-to-toe” with Manchester City. “I feel that’s when we’re at our best,” he said. But he is not Leicester’s manager. Claude Puel decided to adopt the same cautious approach that yielded victory at Stamford Bridge at the weekend, redeploying the same lineup and ordering 11 players to retreat deep behind the ball whenever their opponents had possession. Manchester City were in the end shown plenty of respect.

They did little with all their possession until the 14th minute, when Aymeric Laporte accepted the invitation to stride forward, pinging a low pass to Sergio Agüero, who took on touch to control it and another to flip it in to Bernardo Silva. The Portuguese midfielder guided a low shot past Kasper Schmeichel and into the net. Normal service had resumed. But not for long.

Now Leicester decided to take the fight to their visitors, whose weaknesses suddenly became apparent. Within five minutes the hosts were level. Their equaliser came from a move that began when Ben Chilwell won the ball near the halfway line with a challenge on Danilo almost right in front of Guardiola, who is said to be such an admirer of the young English full-back that Manchester City are mulling over a transfer bid. From the tackle, Wilfried Ndidi and James Maddison helped the ball forward to Jamie Vardy on the right. The striker curled a lovely cross to the far post, where Albrighton arrived on the blind side of Delph and tucked a neat header into the far corner.

City were looking frail at the back and inadequate in midfield, with Fernandinho still absent with knee trouble and David Silva on the bench. Kevin De Bruyne was below par and so, too, was Raheem Sterling, well contained by Chilwell. Leroy Sané was more influential, though Pereira did not make life easy for him.

Recognising his team’s opportunity, Puel adjusted his tactics on the half hour, swapping from a 4-5-1 to a four-man midfield and pushing Maddison forward to support Vardy. That made Leicester more dangerous, although Manchester City were the first to threaten after the switch, Agüero dabbing over the bar from six yards after a cross by Sané.

Bernardo Silva almost gifted Leicester the lead in the 39th minute, playing a careless backpass straight to Vardy. As the midfielder held his head in his hands, Ederson granted him a pardon in the form of a fine save from Vardy’s shot. The goalkeeper was very busy for the next few minutes as Leicester created three more excellent chances to go in front before the break.

First he saved from Maddison after a dainty swivel and shot by the midfielder, then he parried a shot from Hamza Choudhury, who became the latest player to sneak into the space behind Delph. Next, Chilwell made an even better chance. After trapping the ball on his thigh following a misjudgment by Danilo, the full-back dashed into the area and fired a low cross to Vardy, who stabbed it wide from close range. Half-time came as a welcome chance for the frazzled visitors to compose themselves.

They dominated the early part of the second half but Leicester kept them at bay. Puel tried to get his team back on the front foot by introducing Demarai Gray on the hour in place of Choudhury. But Wes Morgan had to make a superb tackle to prevent Sané from scoring from a pull-back by Agüero.

Guardiola acknowledged De Bruyne’s subdued performance by substituting him in the 70th minute, turning to David Silva in the hope of inspiration. The Spaniard soon slipped a canny ball through to Sané, who had it nicked off him in the box by a splendid sliding tackle from Maguire. That was Puel’s cue to make another tweak by replacing Maddison with Danny Simpson to help Pereira quell the rising menace from Sané.

But Puel hardly imagined the tables being turned as spectacularly as they were in the 81st minute. That was when Sané headed a corner by Albrighton to the edge of the area, where Pereira collected the ball and rocketed an unstoppable shot into the top corner. As time ticked down, Delph was ordered off for an ugly follow-through on a tackle on Pereira.