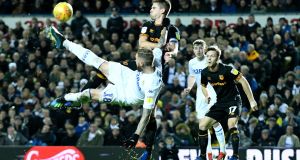 Leeds’ hot streak came to an end as Hull gained a 2-0 victory at Elland Road.

Marcelo Bielsa’s team had claimed seven successive wins but they could not find a way through once Jarrod Bowen scored after 25 minutes.

And the tireless Bowen increased Hull’s advantage in the second half when he calmly scored from seven yards.

Leeds remain at the top of the Sky Bet Championship but they lacked fluency against well-drilled opponents.

The visitors have now won four league games on the spin and are comfortably clear of the relegation zone.

Nigel Adkins’ team created the first chance of the match when Adam Forshaw’s loose pass was seized upon by Bowen. The winger impressively beat three men from the right before his shot from the centre of Leeds’ penalty box was deflected over the crossbar for a corner.

But the home side eventually found their rhythm and came close when Ezgjan Alioski’s floated cross required smart interventions from Stephen Kingsley to deny Jack Harrison and then Pablo Hernandez.

Yet Hull remained a threat on the counter-attack, most notably on the flanks with Bowen and Kamil Grosicki.

Grosicki, though, perhaps should have been more selfish when he bewildered Pontus Jansson with a cunning nutmeg and forceful drive into Leeds’ 18-yard box. Rather than shoot, the Poland international tried a speculative cross which was capably defended by Kalvin Phillips.

That warning was not addressed as Bowen gave Hull the lead seven minutes later.

Grosicki’s cross from the left caused confusion and Phillips failed to snuff out the danger. His clearance instead dribbled towards Bowen, who stabbed the ball home from eight yards.

Hull were good value for their lead, but Leeds would have equalised had goalkeeper David Marshall not been alert to Hernandez’s goal-bound strike from distance.

Bielsa’s men unsurprisingly dominated possession in the second half, but their Yorkshire rivals continued to buzz with intent on the break and doubled their lead after 58 minutes.

Bowen engineered the move after he won possession deep inside his own half, but Grosicki was the chief architect when he surged past Barry Douglas and into the penalty area.

Grosicki’s cross found Jon Toral, whose close-range flick was well saved by Bailey Peacock-Farrell. But the rebound fell kindly to Bowen, who directed the ball through a line of white shirts and into the back of the net.

Few Leeds fans were prepared to give up on their team, who had earned dramatic late victories against Aston Villa and Blackburn over the Christmas period.

And though Luke Ayling’s powerful header was cleared off the line by Toral after 65 minutes, with Tyler Roberts denied in similar circumstances by Todd Kane late on, another improbable comeback never looked likely.