No regrets for Ireland’s John Anderson after Euro ’88 sacrifice 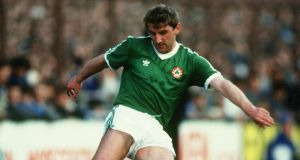 John Anderson in action for Ireland in 1987. Photograph: Billy Stickland/Inpho

Kevin Keegan recalls with some pride in his recent autobiography “My Life in Football” that when the Newcastle Evening Chronicle announced his signing for Newcastle United back in 1982 it was the front page lead. There was rather less fuss around the same time about the arrival of John Anderson, although the Dubliner would end up staying twice as long and playing four times as many games for Newcastle as the former England captain.

It could have been more still, recalls the Irishman, who made Newcastle his home when his playing days ended and who works at almost all of the club’s games for the local BBC radio station, but for his determination to make it to Euro’88. Anderson made the squad and sat on the bench for the three games after passing a fitness test for Jack Charlton but asked now if he could have actually played had he been required to, he laughs before replying: “No. Not a f***ing chance. I couldn’t walk.”

Now 59, the former defender still feels the effects of the ankle injury he picked up in an end of season testimonial on “a crap pitch” but has no regrets about his decision to take the plaster intended to protect the joint for eight weeks off after 10 days so that he link up with the Ireland squad.

“Jack said if you’re not in Dublin, you don’t go. He said; ‘You’re going to have to come over and we’ll assess you, have a look, give you a fitness test and see what the story is’. So I strapped the ankle up and came over.

“You’ve never seen so much strapping. I bought a pair of boots that were a size too big and ran in straight lines. Mick (Byrne) was the physio at the time and I was in agony; the sweat was running out of us. I did it for about 20 minutes and was almost in tears. Jack said ‘alright, you’re fine, you can go’. And that was that!”

He would later have to have five operations on the ankle and realised his career was finally over in 1992 when the surgeon who performed the last one popped his head around the door of his room before heading home and casually announced that Anderson was “knackered,” and would end up “crippled” if he tried to play professional football on it again.

The Dubliner reckons he might have managed another 100 club games if he had skipped Germany and concentrated on a proper recovery but when he talks those days spent as part of the first ever Ireland squad to play at a big tournament, it is clear he would do it all again tomorrow.

Anderson had been around the international squad for almost a decade by then and cites the May 1987 win against Brazil as a career highlight because he had also been in Uberlandia five years earlier when the South Americans had inflicted a seven goal humiliation on Ireland.

Like a lot of the other Irish players that day, he reckons, he viewed the Lansdowne Road game as far more than a routine return friendly and received belated recognition of sorts for his efforts that day when Mirandinha signed for Newcastle a few months later.

“He came to the training ground and he had an interpreter with him, a fella called Jimmy Wallace. Willie McFaul was the manager and he was introducing him to everybody, working his way down the line until he gets to me, takes a step back and says something to Jimmy in Portuguese.

“I said, ‘what’s the fucking story Jimmy,’ and he says, ‘oh, he knows who you are.’ My first thought was: ‘Fucking hell, I’m famous in Brazil!’ But then Jimmy says: ‘he played against you in Dublin. He says you’re a dirty Irish bastard.’

“I hadn’t remembered him but I did then: I had smashed him, to be fair, cut him in half. But that was that. We got on well after.”

A year later, Ireland being at the Euros seemed like something from another planet. “To be there and see those scenes,” he says, suddenly a little breathless at the thought of it, “and Ronnie’s goal against the Russians and to come so close against the Dutch as well, you know, the scenes when you got home, you’d have thought you’d won the thing. . .

“And everybody would come back to the hotel; everybody. There was Guinness all over the place; there were banjos, bodhrans. . . people don’t believe you now but it was like that.

“And Jack was. . . the fact that we’d beaten England, everybody thought it’s not going to get any better than that. But I think the win against England gave everybody the belief that there is a chance here, we most definitely could beat the Russians, it came down to the Dutch game and six minutes short. You look at the goal, a poxy goal. . . But it was brilliant, a great experience.”

Back at the club the coaching and medical staff had gone “loopy” when they first realised he intended to travel despite the injury and McFaul still had to be faced.

“Jack had obviously sent all the managers a letter thanking them for releasing players and Willie called me in and goes ‘I got a letter from Jack. ‘He says you had a great fucking holiday.’ And that was it.”

Well, Anderson could hardly argue, could he?

John Anderson was in Dublin for the opening of the National Football Exhibition which will be in Sligo, Cork and Limerick over the first half of 2019.