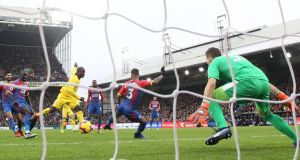 The scoreline may give the impression Chelsea squeezed out a second successive win in their travels but, in reality, Maurizio Sarri’s team may not enjoy too many away victories as comfortable as this. One flash of quality was all it took to claim the spoils across south London and open up a five point gap from fifth place. Crystal Palace failed to muster a single shot on target all afternoon. They never discovered whether the visitors were fragile or not.

This had been desperately humdrum until N’Golo Kanté, his head coach’s half-time instructions presumably still ringing in his ears, injected some impetus early in the second half. Chelsea had been probing, David Luiz sizing up his options in possession inside Palace’s half, when the France midfielder took it upon himself to dart behind and away from Cheikh Kouyaté and between Patrick van Aanholt and Mamadou Sakho to the edge of the six-yard box. David Luiz’s lofted pass was perfectly weighted, with Kanté collecting neatly on his chest and steering his close-range finish in beyond Vicente Guaita’s outstretched left hand.

It was a fine goal utterly out of character with everything mustered up to then, and plenty thereafter. Palace had been stubborn, organised but distinctly unambitious and toothless going forward. Chelsea’s tempo had been slack, lacking invention and incision when confronted by a five-man midfield barrier, until they roused themselves towards the end of a dreary opening period to strike the woodwork twice. Even then, the hosts would have had cause for complaint had either effort actually secured the lead.

Eden Hazard, scuttling into a rare pocket of space, had clipped his own heel 11 minutes from the break before tumbling, with Craig Pawson awarding a generous free-kick. Willian struck that on to the outside of the post as Guaita dived, with the referee compounding his earlier error by spying a non-existent touch from the goalkeeper. Willian would test the Spaniard again from distance at that set-piece, forcing a second corner from which Ross Barkley, having shoved James McArthur away, acrobatically flicked a shot on to the same upright with his back to goal.

The flurry of chances had hinted at promise but would not have satisfied Sarri, fidgeting in frustration in his technical area, even if the lead secured early after the break duly lifted the Italian’s mood. Chelsea felt in complete control against a side who cannot secure forward reinforcements – with Dominic Solanke, on loan from Liverpool, likely to be the first – soon enough.

Palace would eventually introduce Connor Wickham to provide more punch but, other than the substitute planting a half-volley over the bar, a team who had plundered three goals at Manchester City just before Christmas rarely boasted a threat. Their calendar year has fizzled out, and they cannot consider themselves clear yet of trouble.