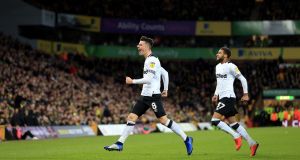 Norwich failed to make Leeds pay for their defeat to Hull, remaining three points behind after letting a lead slip twice in a 4-3 defeat to Derby at Carrow Road.

Ben Godfrey and Teemu Pukki had fired the Canaries 2-0 ahead inside 31 minutes only for Fikayo Tomori and Mason Mount to level prior to half-time.

Pukki made it 3-2 in the 81st minute but, after a brief delay for floodlight failure, Florian Jozefzoon and Jack Marriott struck at the end for the visitors.

A fifth-minute strike from Atdhe Nuhiu appeared to be putting Wednesday on their way to a third consecutive win under caretaker boss Lee Bullen but, having seen Jay Rodriguez sent off, Brunt struck.

The striker took his tally for the season to 16 and David McGoldrick also found the net after United defender Chris Basham and Rovers midfielder Richie Smallwood were sent off.

Birmingham and QPR passed up the opportunity to make ground on the play-offs following goalless draws with Brentford and Reading respectively.

Aston Villa were also frustrated at Preston, drawing 1-1 after Ahmed Elmohamady’s own goal cancelled out Tammy Abraham’s 14th strike of the season.

Billy Jones and Richie Towell were sent off before Adam Webster struck the winner four minutes from time, dropping the Millers into the relegation zone.

Joe Garner scored twice in the first half, the first from the penalty spot, but Dan Burn put through his own net and Van Der Hoorn levelled the game at 2-2 in the 81st minute.

1 Robbie Henshaw likely to be the only Irish change for France finale
2 Bartomeu resigns and drops bombshell of Barcelona joining European Super League
3 Seán O’Brien: Anger over my parents’ break-up never left me
4 Cian Healy: ‘Realistically I got away with murder when I was younger’
5 Ireland's centre will hold thanks to Henshaw and Aki’s midfield muscle memory
Real news has value SUBSCRIBE