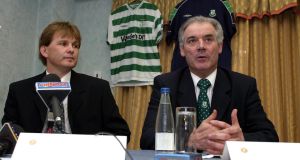 Shamrock Rovers chairman Joe Colwell (right) at the announcement that Liam Buckley was to take over as manager in April 2002. Photograph: Andrew Paton/Inpho

In a warm tribute on its website, Rovers acknowledged the key part that Colwell had played in keeping the club going during what was a difficult period in the wake of its departure from Milltown and working towards the establishment of a new home in Tallaght.

Colwell, who played League of Ireland football, mainly for Drumcondra, joined the club’s board in 1988 and later became both its majority shareholder and chairman. He put huge energy into his involvement and, it seemed, a very substantial amount of his own money into keeping the first team competitive through a period of major upheaval.

His hopes of seeing things through to the point when the club’s future was secure in Tallaght were hampered by repeated setbacks to the stadium project which was eventually taken over by South Dublin County Council.

“He gave 100 per cent but everywhere he went there just seemed to be another obstacle,” says one former board member. In the end, he handed over control but continued to play a part in the background in the efforts to complete the move.

“Everyone at Shamrock Rovers F.C. owes a debt of gratitude to Joe who sacrificed so much to enable the club get to Tallaght,” said the club in its statement. “[He] was an affable and pleasant person who always had time to chat with everyone at the club be they patrons, sponsors or just ordinary supporters. He was his own man though and was very clear in the vision he held of what would make Shamrock Rovers great once again.”

Colwell’s son, Jason, continues to coach at Rovers having previously been a prominent player for the club.