Four goals and another clean sheet for Liverpool against Newcastle 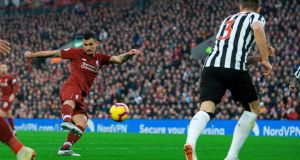 It resembled an electric pulse beating through Anfield. Liverpool were coasting against Newcastle when word filtered through of Manchester City falling behind at Leicester. When the initial commotion died down there was greater conviction to the songs about topping and winning the league that flowed from the Kop. Liverpool believe.

The 100th victory of Jürgen Klopp’s Liverpool reign took his team six points clear of Tottenham and seven ahead of City at the top of the table and extended their unbeaten run at Anfield to 30 league games. On current form, which is improving form, they will take some stopping in the second half of the season. Dejan Lovren, Mohamed Salah with a controversial penalty, Xherdan Shaqiri and the substitute Fabinho were all on the scoresheet for a team that is clicking at the same time as the reigning champions falter.

Liverpool’s opener was a present from Jamaal Lascelles, the Newcastle captain, who made a mess of a straightforward clearance, teed up Lovren for his first goal of the season and undermined his team’s encouraging start in one action. There was no pressure on the central defender when Andy Robertson whipped over a deep cross from Shaqiri’s short corner but he miscued a header back across the penalty area. The ball dropped invitingly for Lovren who swept an emphatic, rising drive into the roof of Martin Dubravka’s net and Liverpool were on course for another home win. It was a finish that would have found approval from the onlooking Kenny Dalglish, Kevin Keegan and Alan Shearer, though not the defending, obviously.

Benítez’s team had started brightly until that point, with their threat from set pieces and Matt Ritchie’s deliveries stretching Liverpool. Unfortunately for the visitors it was not only Lascelles who struggled with his heading. Joselu, starting ahead of Salomón Rondón as Benítez perhaps selected with Watford on Saturday in mind, was well placed to put Newcastle ahead when Ritchie’s cross sailed over Virgil van Dijk. Unmarked in the six-yard box, the Spanish striker headed down and several yards wide of Alisson’s goal.

Liverpool were in no mood to offer further invitations once in front, however, and controlled proceedings after Lovren’s strike. Sadio Mané was close to converting Roberto Firmino’s through ball only for Dubravka to stand tall and save well with his feet. The Newcastle keeper was also alert to a powerful free-kick from Shaqiri that took a slight deflection off Mohamed Diamé and prompted another instinctive stop. He was beaten again by a highly controversial penalty awarded moments after the restart, however.

Salah converted the spot-kick low to Dubravka’s right having won it with a theatrical tumble as he cut into the area from Trent Alexander-Arnold’s pass. Paul Dummett did touch the Liverpool forward’s arm inside the area but not enough to impede Salah or produce the collapse that followed. Graham Scott, the referee, bought it and Liverpool scored a Premier League penalty at Anfield for the first time since November 2016. But the legitimacy and merit of victory were never in question.

With the threat from Newcastle nonexistent Klopp could afford to look ahead and rest Georginio Wijnaldum and Firmino for the remainder of the contest. Shaqiri converted the third after the visitors failed to clear a dangerous low cross from the fit-again Alexander-Arnold. Jordan Henderson threaded a fine ball back to the defender on the right and, from his second attempt, the Switzerland international was on hand to beat Dubravka convincingly from close range.

News of Leicester’s second goal against City was still being digested by the Anfield crowd when the hosts claimed their fourth of a perfect St Stephen’s Day. Salah was the provider with an in-swinging corner to the near post where Fabinho headed home his first Liverpool goal under minimal pressure from Diamé.

Alisson preserved his clean sheet with a fine late save from Sean Longstaff and Liverpool moved serenely on, and six points clear, at the Premier League summit.