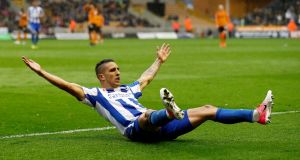 Brighton’s promotion to the Premier League could be secured on Monday after they beat Wolves, while Chris Wood’s stoppage-time leveller for Leeds at Newcastle enhanced the Seagulls’ title prospects too.

Recently-crowned Championship Player of the Year Anthony Knockaert scored in either half in the Seagulls’ 2-0 success in the midlands and should Brighton defeat Wigan on Monday afternoon, their promotion would be confirmed if Huddersfield fail to win at Derby later that day.

Newcastle could have moved to the brink of a top-flight return too, though Leeds striker Wood’s 25th goal of the season in the fifth minute of stoppage time cancelled out Jamaal Lascelles’s opener in a 1-1 draw that leaves Rafael Benitez’s side four points adrift of Brighton, and eight above Huddersfield, who have a game in hand.

The Terriers had kept alive their slim hopes of catching the top two with some late drama themselves after Collin Quaner’s winner six minutes into injury time earned them a 3-2 victory over Preston earlier on.

Having taken just three points from the previous 12 available to lose ground on Brighton and Newcastle, the Terriers had fallen behind to an Aiden McGeady strike before turning the game on its head through goals from Elias Kachunga and Jack Payne.

Jordan Hugill nodded Preston level with 11 minutes remaining before the striker conceded a stoppage-time penalty for an off-the-ball incident with Kachunga, and though Aaron Mooy’s spot-kick was saved by Chris Maxwell, Quaner tucked away the rebound.

The Owls were set to be displaced in the top six before Forestieri grabbed the winner once Jordan Rhodes’s effort had been saved to deliver a 1-0 success over Cardiff at Hillsborough.

That meant Fulham remained outside of the play-off spots despite a 3-1 win over Norwich at Carrow Road.

The Cottagers had been ahead as early as the fifth minute in Norfolk through a strike from Norway captain Stefan Johansen, yet they lost ex-Canaries striker Chris Martin to a red card in first-half stoppage time.

However, Tom Cairney’s penalty increased their lead and though Cameron Jerome pulled one back, Floyd Ayite made sure of the points with a third goal one minute from time.

Tommie Hoban’s winner at the City Ground boosted Blackburn’s survival prospects and dragged Nottingham Forest closer to the relegation mire. Hoban’s first goal for Rovers 12 minutes from time cut the gap between one of the bottom three and Forest to just two points as Blackburn won 1-0.

Mark Warburton’s team would have moved eight points clear of trouble had they won but will now be looking nervously over their shoulder ahead of the final four fixtures, as will Burton, who lost 2-1 against Ipswich, and Birmingham, who could only pick up a point at already-relegated Rotherham in a 1-1 draw.

At the end of the week where Blues’ board gave Gianfranco Zola a vote of confidence, Kerim Frei’s opener was cancelled out by Danny Ward’s 85th-minute leveller to leave Birmingham just four points above the bottom three with four to play.

They were leapfrogged by Bristol City, also on 47 points, after they defeated QPR 2-1 thanks to first-half goals from Marlon Pack and Jamie Paterson, with Idrissa Sylla grabbing a late consolation, as Lee Johnson’s side made it back-to-back victories.

Elsewhere, braces for Lasse Vibe and Jota helped Brentford to a 4-0 thrashing of Derby at Griffin Park.