Draw in Brussels gives the advantage, but it’s a 14th of the season for goal shy United

nderlecht and Manchester United battled to a 1-1 stalemate in their first leg of the Europa League quarter-final on Thursday (April 13), and the Red's manager Jose Mourinho expressed disappointment with his strikers. 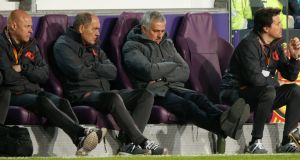 Jose Mourinho admits it is “difficult” to know how to instil the missing killer instinct that continues to hamper Manchester United’s struggling season.

Comfort made way for frustration as Thursday’s Europa League quarter-final first leg at Anderlecht came to a close — an all too familiar theme during the Portuguese’s first season at Old Trafford.

Henrikh Mkhitaryan put United on course for a deserved victory at the Constant Vanden Stock Stadium, yet an inability to turn dominance into goals saw them caught cold by Leander Dendoncker’s late header.

While United’s away goal in the 1-1 draw could prove decisive, a 14th draw of the campaign in all competitions clearly irked Mourinho.

“The result is positive,” the United boss told the post-match press conference.

“But I think the result should be much better and we can only blame ourselves because we had an easy game to play in the second half and we didn’t play in attack with that instinct.

“We lost the ball easily too many times, we stopped our counter-attacks because of sloppy touches, sloppy decisions.

“And then we gave them the opportunity to have some counter-attacks that luckily our defenders were very much in the game and they resolved all these problems.

“But if I was a Manchester United defender I would be very upset with the attacking players because they have to kill the game and they didn’t.”

Asked what he can do about United’s poor finishing, Mourinho retorted: “Good question, difficult answer.”

The need to “kill matches” is clear if United are to kick on and veteran midfielder Michael Carrick echoed his manager’s sentiments.

“It was frustrating but we were so in control in the first half and we got sloppy,” he told BT Sport.

“We’ve got to kill teams off and we were in control of the game but we didn’t do that.

“It was frustrating but we didn’t do that and we should have won that game comfortably.

“I’m completely disappointed really. We need to be more ruthless and kill things off, it’s as simple as that. It’s too comfortable.

“It was almost too easy at times and we got sloppy and lost possession. It’s one of those scorelines where it’s dangerous.”

Anderlecht manager Rene Weiler was understandably upbeat by contrast, given the way the club’s first European quarter-final in 20 years ended.

“We played against a very good team in Manchester United.

“We had a lot of difficulties in the first half, we did not create a lot of chances, the opponent was very strong.

“In the second half, we showed a lot of courage. I am proud that how the team played tonight.”