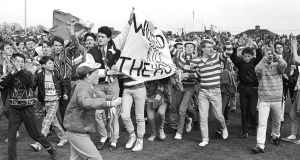 For quite a few Shamrock Rovers supporters, the press conference held by the Irish women’s team last week will have brought back some memories.

Liberty Hall was one of the venues for the meetings that were held as fans of the club sought to keep Rovers at Milltown and fight the decision by the Kilcoyne brothers to sell our home.

The first inkling we had got about the move was when we read an article by Charlie Stuart in the Irish Press on the morning of Friday, April 10th 1987.

There had been no communication from the owners of Rovers about the proposal that the team relocate to Tolka Park and the sense of anger and betrayal amongst the supporters was palpable.

There was a half-time pitch occupation at the last game, an FAI Cup semi-final played 30 years ago this week, on Sunday, April 12th, and the banner asking “Will greed kill the Hoops” summed up the fans’ feelings on the matter.

Crowds had been falling over the four years since Rovers were league champions but there had been no serious attempt by the owners to market the club. No schools were visited or trophies displayed in any of the local pubs . . . none of the stuff that would be commonplace now.

Louis Kilcoyne stated at the time when you have a Rolls Royce people should want to come and see it. We’ve learned the hard way during the years since that football doesn’t work like that; you need to have the fans actively involved in the running of the club and a lot of work has to be done to reach out to the wider community.

An oral hearing on the application was held that October when the Jesuits, who had originally owned the ground, said they would not have sold it to the Kilcoynes had they know that it would ultimately be used for housing.

Their neighbours in the Sisters of Charity took a different view, making it clear that if Milltown was built on, their land values would appreciate considerably.

In the event, the original decision was overturned by An Bord Pleanala on March 16th, 1990 and both orders ultimately benefited with each subsequently selling parcels of land for development.

By then, the club had become legally separated from its home. In July 1988, with fans boycotting games at Tolka Park, the Kilcoynes had sold Shamrock Rovers to a consortium led by John McNamara while the brothers retained control of the stadium.

Rovers subsequently hit the road again, playing at Dalymount Park, of all places, for two years before moving to the RDS in September 1990.

Few would have believed back in April 1987 that it would take Rovers 22 years to secure a new home but it did and it was Friday, March 13th 2009 before the club played for the first time in Tallaght.

Their opponents were the same that night as for the last home game at Glenmalure Park, Sligo Rovers, and, as luck would have it, they will also be the ones visiting for tonight’s game at which this week’s anniversary will be marked.

The intervening years were ones of struggle for the club and those who loved it and many great supporters of the Hoops had passed away before Rovers played their first match in Tallaght.

It wasn’t all doom and gloom and there are very fond memories of the team Ray Treacy and Tony Macken put together to win the league title in 1994 at the RDS – but that was the only success during all that time.

Things weren’t helped by the endless delays to the move and it still angers the Rovers faithful that the GAA tried to prevent it ever happening.

Now, though, it’s time to move on from those times and consolidate Rovers’ presence in Dublin 24. There have also been some great successes for the team and the fans have great hopes for the Academy down the road at Roadstone. In years to come, many fine young players will be produced from there.

Those of us who are old enough will continue to remember Milltown as a great venue with an almost carpet-like playing surface and a fantastic atmosphere when there was a good crowd in place.

But quite a few of the stalwarts from back then have come to believe that Tallaght offers the club more in terms of facilities and the opportunity to build a community based club.

We all have great memories of Milltown and hopefully in the years to come we’ll have similar memories of great victories and triumphs in Tallaght Stadium. It is, as they say, time to write some new history.