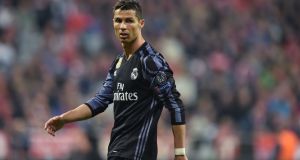 Cristiano Ronaldo in action for Real Madrid in the first leg of the Champions League quarter-final against Bayern Munich at the Allianz Arena. Photograph: Christof Stache/AFP/Getty Images

Football star Cristiano Ronaldo has reportedly paid $375,000 compensation to a woman who claims he raped her in a Las Vegas hotel room in 2009.

The alleged settlement, reported in Saturday’s Der Spiegel magazine, imposes a gag order on the woman ever discussing the claims in public.

They date back to an alleged encounter in Las Vegas on July 13th, 2009, when the unnamed woman was in her mid-20s.

In a six page statement, read aloud as part of the settlement, she detailed the alleged rape from her perspective, and the personal consequences for her.

The document was read aloud by the footballer’s Portuguese lawyer Carlos Osório de Castro at a mediation session in Nevada on January 12th, 2010.

After this a three-page settlement document was signed, in which the footballer is described as “Mr D” and the woman as “Ms C”.

As part of the out-of-court agreement the woman, unnamed in Der Spiegel’s report but known to the magazine, agreed to drop all charges.

De Castro, who reportedly signed the document on behalf of his client, declined to comment on the claims when contacted by Der Spiegel.

He added that he never commented on clients’ affairs and said no inference should be made by his silence.

The magazine says it was contacted by a second German lawyer, Johannes Keiler, dismissing the claims and urging it to drop the report into the Real Madrid player.

“The accusations implied by your questions are to be rejected in the strongest possible terms,” he said, warning his client would “act against every untrue claim and the injury of his personal rights”.

In October 2005 Ronaldo, then a Manchester United winger, was questioned on suspicion of rape.

Two women claimed they were sexually assaulted by Ronaldo and another man in a penthouse suite at London’s Sanderson Hotel earlier that month.

Ronaldo denied the charges and they were later dropped.