Crystal Palace have no option to buy Mamadou Sakho from Liverpool 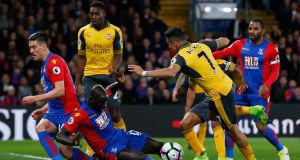 Crystal Palace manager Sam Allardyce has revealed the club have no option to sign Mamadou Sakho permanently at the end of his loan spell from Liverpool.

The France defender has had a significant influence on the vast improvement in Palace’s form that has led to five victories from their past six fixtures and taken them into contention to preserve their Premier League status.

Allardyce has suggested they would be interested in keeping the 27-year-old beyond the end of the season, but despite paying an initial loan fee of £2million they will have little advantage over any rivals that may emerge.

“There isn’t a clause because his deal was done in the Bournemouth corridor by me after we had won 2-0, and Steve (Parish, Palace’s chairman) finishing the negotiation over the phone to try and secure Mama,” said Allardyce, 62.

“What a great deal that was. It was a negotiation on the final day (of the transfer window) — it was just about getting it done, getting the loan deal done, not haggling about other things other than just making sure we get him here.

“At the moment that has paid off for us. What happens in the summer can only happen in the summer and can only be talked about, for me, when we are safe.

“We are not safe and can’t talk about Mama Sakho being a permanent deal here because we’re still not safe and our position in the Premier League is not safe.”

The winger, 24, has been equally as impressive as Sakho and, amid reports of interest from Tottenham, Palace hope he will commit to them by signing a new contract. His present terms tie him to the club until 2020.

“Staying here, since he’s come back (from Manchester United) and how well he’s done — his development, his more consistent performances — we would all love him to be at Crystal Palace for a long period of time,” said Allardyce.

“That can really only be determined now in the summer, whether he signs a new contract or not.

“Hopefully that’s the case. Once players build a reputation today, home-grown players particularly, there’s always a lot of interest in those players.

“He gained that experience (in moving to Manchester and not playing). Steve was extremely clever in negotiating the return and we’re all benefitting from that at the moment, and long may we benefit for many seasons from now.”

Zaha is again expected to be crucial when Palace host Leicester on Saturday. Patrick van Aanholt is in contention to return having recovered from an ankle injury, but Allardyce is expected to retain the same team that defeated Arsenal 3-0 on Monday.