Catch up on all the latest injury and suspension news 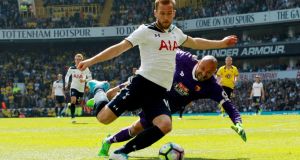 Harry Kane is set to make his first start in almost five weeks for Tottenham. Kane came off the bench against Watford last weekend and is pushing for a starting berth, while Victor Wanyama is expected to return after missing two matches with a back complaint. Danny Rose (knee), Erik Lamela (hip) and Harry Winks (ankle) are all out. Goalkeeper Michel Vorm is struggling with a knee problem.

Bournemouth midfielder Dan Gosling remains doubtful after suffering a setback to his recovery from a knee problem. Defender Tyrone Mings is available again after serving out his five-match suspension for a stamp, while winger Junior Stanislas could feature having been sidelined by a groin strain. Midfielder Andrew Surman, though, may well be sidelined for the remainder of the campaign with a knee problem.

Crystal Palace (16) v Leicester (11), Live Sky Sports 5
Crystal Palace will again have Patrick van Aanholt available for selection after he recovered from an ankle injury. The left back will vie for selection Jeffrey Schlupp, but manager Sam Allardyce is otherwise expected to make few changes to his in-form team. Allardyce remains without the injured Scott Dann, Pape Souare, James Tomkins, Fraser Campbell and Connor Wickham, but Loic Remy is closer to a first-team return.

Captain Wes Morgan is out for Leicester as boss Craig Shakespeare tries to save him for the Champions League. The defender has missed the last five games with a back injury but the Foxes need him available for Tuesday’s quarter-final second leg with Atletico Madrid, although he is still rated at just 50-50. Shakespeare is likely to rest some players ahead of their European clash and Jamie Vardy, Christian Fuchs and Yohan Benalouane could all be kept fresh for Tuesday while Nampalys Mendy has an ankle injury.

Burnley welcome back midfielder Steven Defour as they continue to search for a first Premier League away win. Defour injured his thigh in the win over Stoke earlier this month but is ready to return to the squad. Johann Berg Gudmundsson (knee) scored twice as he made a comeback for the under-23s in midweek but he could be another week away from match fitness.

Stoke (13) v Hull (17)
Goalkeeper Jack Butland is moving closer to his long-awaited Stoke return and could make the bench. Butland has been out since injuring his ankle with England in March 2016 but after featuring for the under-23s in midweek he could step up with Shay Given (back) a minor doubt. Joe Allen has been ruled out after suffering a knock against Burnley, Jonathan Walters is a doubt and Ibrahim Afellay could be out for the season after undergoing a knee operation.

Hull defender Harry Maguire faces a late fitness test. Maguire missed last week’s defeat at Manchester City due to a knee injury and although he returned to full training this week, the centre half remains doubtful as the Tigers chase their first league win on the road since August. Midfielder Tom Huddlestone is available after serving a three-match ban and striker Dieumerci Mbokani (hamstring) is back in contention, but defender Omar Elabdellaoui (back) is still out.

Watford (10) v Swansea (18)
Watford forward Troy Deeney could be in contention to return to the starting line-up. Deeney started on the bench last weekend at Tottenham, with manager Walter Mazzarri concerned over fatigue. Younes Kaboul (hamstring), Sebastian Prodl (rib) and Valon Behrami (hamstring) have all been carrying injuries, so could miss out again. Defender Miguel Britos serves out his two-match ban.

Swansea midfielder Jack Cork will miss out after suffering a recurrence of a recent ankle injury. Leon Britton and Jay Fulton are pushing to replace Cork with Swans boss Paul Clement indicating he may change his formation following their defeat at West Ham. Fernando Llorente is set to return to the starting line-up after coming off the bench against the Hammers following two games out with an ankle problem.

Sunderland (20) v West Ham (14)
Full back Bryan Oviedo is out for Sunderland as he faces up to five weeks on the sidelines. Oviedo damaged a hamstring during last Sunday’s 3-0 home defeat by Manchester United. Midfielder Sebastian Larsson starts a three-match ban but central defender John O’Shea returns from compassionate leave following the death of his father and loan signing Adnan Januzaj, who was ineligible against his parent club, is available once again.

Mark Noble and Michail Antonio will be missing from the West Ham squad. Skipper Noble is suspended and winger Antonio is out for the rest of the season with a hamstring injury, joining Winston Reid (groin), Angelo Ogbonna (knee) and Pedro Obiang (ankle) on the casualty list. But Andy Carroll is now fully fit after a groin problem and Sam Byram (ankle) and Aaron Cresswell (muscle) have shaken off knocks.

Southampton (9) v Manchester City (4), Live BT Sport 1, 5.30pm
The returns of Manolo Gabbiadini and Steven Davis mean Southampton have a near fully-fit squad. Manager Claude Puel is yet to decide whether either will start, but their presence in his squad leaves Charlie Austin – close to returning from an injured shoulder – and Virgil van Dijk, who has an injured foot, as his only major absentees.

Manchester City manager Pep Guardiola is still to decide whether Claudio Bravo or Willy Caballero will play in goal. Striker Gabriel Jesus (foot) and right back Bacary Sagna (groin) remain on the sidelines but could be back before the end of the month. Captain and defender Vincent Kompany is in contention after not being risked against Hull last weekend.

West Brom (8) v Liverpool (3), Live Sky Sports 1, 1.30pm
West Brom boss Tony Pulis should have a fully-fit squad to choose from. There are some players nursing the usual bumps and bruises but nothing that should hamper his team selection. Few changes to the starting line-up are expected but the likes of Chris Brunt, Hal Robson-Kanu and James McClean could come into Pulis’s thinking.

Liverpool captain Jordan Henderson and fellow midfielder Adam Lallana are still not fit to return. Henderson was expected to begin training this week but his foot injury is still giving him problems, while Lallana (thigh) is not expected back with the squad until the week after next. Brazilians Roberto Firmino and Philippe Coutinho will return to the starting line-up after being rested at Stoke.

Manchester United (5) v Chelsea (1), Live Sky Sports 1, 4pm
David De Gea is set to return to the Manchester United’s starting line-up. The goalkeeper, linked heavily with a move to Real Madrid, missed last weekend’s trip to Sunderland with a minor injury and was an unused substitute in the midweek trip to Anderlecht. Wayne Rooney (ankle) and Ashley Young (groin) trained before that match so will be hoping to prove themselves fit for Sunday, but Phil Jones (foot), Chris Smalling (knee) and Juan Mata (groin) are out.

Chelsea boss Antonio Conte should have a fully-fit squad. Wing back Victor Moses returned from a toe injury against Bournemouth last Saturday and came through unscathed. Conte could therefore name an unchanged side from the 3-1 win at Dean Court.

Middlesbrough (19) v Arsenal (6), Live Sky Sports 1, 8pm
Gaston Ramirez is set to return for Middlesbrough. Ramirez has missed Boro’s last two games with an ankle injury and is expected to go straight back into interim boss Steve Agnew’s starting line-up. Boro are still without Fabio and George Friend while Calum Chambers also misses out against his parent club.

Arsenal could welcome back captain Laurent Koscielny and first-choice goalkeeper Petr Cech. Koscielny has sat out the last two games after injuring his Achilles against Manchester City while Cech has been sidelined with a calf problem. Manager Arsene Wenger rates their chances of being involved at the Riverside as 80 per cent, but Lucas Perez (thigh) and David Ospina (back) remain absent.