Manchester United still in control despite late slip in Brussels 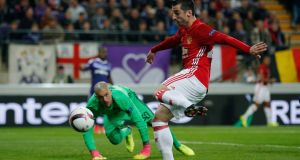 Manchester United should still be confident of reaching the semi-finals of Uefa’s second tier club competition, despite Leander Dendoncker’s late strike that drew the opening leg in Brussels. Until then Anderlecht had barely managed an attempt and United will rue Marcus Rashford, Jesse Lingard and Henrikh Mkhitaryan were not ruthless enough, though the latter did score United’s goal.

Yet given Jose Mourinho’s vast European experience and Anderlecht’s undoubted inferiority to United, the Portuguese’s team should still progress when next week’s return leg is played.

As has been true at many of the venues for United’s six away trips in this Europa League odyssey, the stadium rocked, but the home fans did not witness the Belgian league leaders attain early ascendancy, and would not throughout any of the opening half.

Beforehand, Paul Pogba had defended his seven-goal return in 43 appearances as being a function of him being a “maker of the game” and not a striker. The delightful left-foot pass he launched into an on-running Marcus Rashford from near his area to Anderlecht’s showed precisely what the Frenchman believes his role is for the side.

Rashford’s failure to connect had Pogba disappointed – the same emotion felt when Lingard hit Martínez Ruben’s left post just after the quarter hour. The chance came when Rashford crossed from the left, Zlatan Ibrahimovic’s shot was repelled by the goalkeeper, and Lingard missed the target from close range and saw the ball rebound off the upright.

Mourinho has been an open critic of his forwards’ collective poor return of goals and this moved the manager to bow his head from his vantage point in the technical area.

Before this, Anderlecht threatened with two quick corners from either side, and they also launched a flowing move that went from Massimo Bruno to Youri Tielemans to Dennis Appiah before Rashford’s sharp intervention led to a United goal-kick.

The surprise in Mourinho’s selection was his standing down of Ander Herrera and Marouane Fellaini to the bench. Regarding the Spaniard, this may have been as protection ahead of next week’s return leg as he is a booking away from a suspension. Fellaini’s exclusion seemed counter-intuitive given he captained United in the win at Sunderland and was a junior at Anderlecht, so might have possessed an extra edge. This meant the manager chose Michael Carrick in midfield – as Pogba’s partner – for a first start in two weeks, with the 35-year-old positioned in front of the defence.

Rene Weiler had a total of nine players in danger of suspension, though not all of these started. The biggest name left out was the highest scorer, Lukasz Teodorczyk, who was among the substitutes.

As the half hour passed United continued to probe from inside Anderlecht’s half. Carrick sprayed the ball to Rashford but he could not punish the home side. Then, quick and slick work around the area led to a Mkhitaryan effort, but again there was no reward for United.

Mourinho’s demeanour when discussing the finishing deficit from those other than Ibrahimovic can be weary resignation. An illustration of why came when Mkhitaryan again received the ball in the danger zone near Ruben’s goal. Yet rather than smack it hard at the No 1 he instead over-elaborated with a flick over the top that found absolutely no one.

Then, at last, Mkhitaryan did pull the trigger and it was successful. This opener derived from a first-time Rashford attempt that when saved by Ruben squeezed to the left. The Armenian’s clever finish from a tight angle gave him a 10th this term. It arrived eight minutes from half-time and meant United strolled off at the break in good heart.

Given that Anderlecht had been close to toothless, Mourinho may have sensed more goals and a higher margin for his side if they continued pressing.

The start of the second half did not follow suit. Carrick jumped on Frank Ancheampong and was booked by referee Felix Brych. Nicolae Stanciu sent the free-kick to the right of Romero’s goal but pinged the ball over.

Moments later Antonio Valencia made a double block inside the area and suddenly United were scrambling for the first time. Next, Pogba produced a cool juggle-then-hook away, again inside the 18-yard rectangle.

United now sped up-field and should have doubled the lead. Matteo Darmian’s cross went sweetly into Mkhitaryan but his volley missed to Ruben’s left. On 62 minutes Mourinho replaced Lingard with Anthony Martial, which suggested he felt it too early to hang on until the close.

What ensued was some United keep-ball and Anderlecht forays that caused few major headaches until Dendoncker’s finish. Fellaini was booed when entering late on yet he managed to work Ruben, something Anderlecht had failed to do enough with Romero.

Before kick-off Mourinho said: “We have a special feeling for the Europa League because now this is the only competition we can win. It will be difficult. We play 10 matches to get here, we travel around Europe, now we have to push.”

The next one comes on Thursday at Old Trafford.

Leo Cullen: ‘a good chunk of the guys who are injured will be back’ 06:15
Rachael Blackmore’s Grand National victory resonates around the world 06:00
Louis and Robinson may have died broke but their legacy is timeless 06:00
Potential of Parsons and Wall put French and English on notice 06:00
Ken Early: It’s time for Alexander-Arnold to move to the middle 06:00