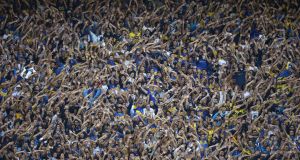 A seething mass of passion: The Boca Juniors fans during a Superclásico match against River Plate in 2013. Photograph: Juan Mabromata/AFP/Getty Images 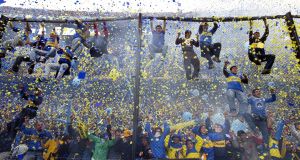 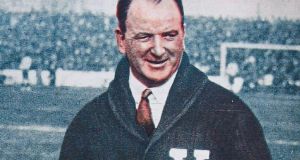 It is the club of Antonio Rattin, of Alberto Tarantini, of Claudio Caniggia, Juan Roman Riquelme and Carlos Tevez. It is also the club Diego Maradona wanted to play for and to whom he made his first transfer: Boca Juniors.

Today once again top of Argentina’s Primera Division, Boca Juniors are the most successful club in Argentina. Boca have a history and pedigree to cherish. And right at the start of it all was a man from Cashel, Co Tipperary.

Paddy McCarthy was his name and without him Boca Juniors as we know it might never have happened. Doubtless a variation of Boca would have grown, but it was Paddy McCarthy who acted as the sporting mentor to the five Italian students in the La Boca district of Buenos Aires in April 1905 who came together to create a football club that would become known around the world.

Having arrived in Argentina on a boat in 1900, McCarthy was teaching PE by 1905. The five Italians were his students. A sports enthusiast and a fine boxer, McCarthy became Boca Juniors first coach, which is a quite a claim to fame – even if the term ‘coach’ is hardly what it is today. For good measure McCarthy was also grandly titled ‘president’ of Boca Juniors for 17 years.

It is some story and can be heard in a new four-part series on Tipp Mid West Radio beginning on Wednesday.

McCarthy’s role in establishing Boca Juniors has been the subject of some limited investigation in recent years but Tom Hurley’s programme promises to be the most thorough yet. Even Hurley accepts though that adding flesh to the bones and fragments of knowledge concerning a man born in 1871 is fraught with assumption and speculation.

One rumour Hurley can debunk, however, is that Boca’s famous blue and gold jerseys stem from Tipperary hurlers. That is co-incidence – Boca’s colours come from a Swedish boat sailing into the old port of Buenos Aires in 1913.

McCarthy had made that same arrival in port in September 1900. This is a small piece of the documentation which Hurley and the Buenos Aires-based historian Edmundo Murray have been able to uncover.

Few details of McCarthy’s Cashel past appear to have been written down. When he became well-known in Argentina – and he was the subject of many reports and interviews in the top-selling sports magazine El Gráfico – Cashel seems to have gone unmentioned.

One thing that is known is that he attended the Christian Brothers School in Cashel, but there is, for example, no record of his parents, who they were or what they did.

More is known about McCarthy’s departure at the age of 29 at a time when many from Ireland were heading to Argentina. It then had a frontier/new life reputation akin to America, Canada and Australia. “Land, you could get land, that was a big appeal,” says Hurley.

There was a first Irish convent in Buenos Aires as far back as 1856 and, Hurley says, a significant number left the Irish midlands in particular for Argentina. It is perhaps less surprising then that McCarthy should run into a man named Brady.

Having been listed as a “crew member” on the vessel that sailed into Buenos Aires, it may be guessed that McCarthy “worked his ticket” in order to get there. He then worked on the port where he encountered the Reverend Henry Brady who had set up a Seaman’s Mission. It is still around.

They convened a boxing festival. McCarthy was already teaching English in the Commerce School, which had an Irish headmaster, James Fitzsimons. Buenos Aires had a large and influential English population then and something of a colonial feel.

McCarthy clearly fitted in. Buenos Aires was a young city and football was a young sport. It was introduced to Argentina via the English and Scots who worked there, and while Cashel in the 1880s and ’90s is unlikely to have been a ‘hotbed of soccer’, Hurley points to the research of David Toms and his book Soccer in Munster’, which shows football was more than just a garrison game then.

McCarthy may have played the game in Cashel. He was good enough to coach and play for clubs other than Boca – Lobos, started by Irish immigrants, then Estudiantes and Central Athletic. The game was amateur then, and did not turn professional in Argentina until 1931.

Amateur but thriving: in 1910 McCarthy travelled with Estudiantes to Brazil for an early forerunner of the Copa Libertadores, and in 1913 McCarthy stepped in as the referee when Boca Juniors met River Plate in a derby known to us now as Superclásico. That was the first one; almost 70 years later Maradona scored a Boca hat-trick in the same fixture.

McCarthy was a referee for 18 years and his time in Buenos Aires ran alongside football’s journey into the centre of Argentinian culture. By the age of professionalism, as Jonathan Wilson explains in Angels With Dirty Faces, football was essential to Argentina’s perception of itself.

“What was an Argentinian?” asks Wilson of the early 20th century state of nationhood in the country. “Up to a point, an Argentinian was best defined as somebody who supported Argentina at football.”

The country already had the gaucho cowboy ideal. Now it had the idea of the gaucho on the pitch.

For a man from Tipperary, it’s a long way to Buenos Aires, but by 1930 Paddy McCarthy was a man about town, someone to be photographed with when visiting – as the Duke of Kent was, as Gene Tunney was, as former US president Theodore Roosevelt was. It was from Roosevelt that McCarthy received the jacket with the letter ‘Y’ on it – Y for Yale.

It is not known if McCarthy ever returned to Ireland, to Cashel. El Gráfico, which ran a series in the 1940s titled “Unforgettable Figures”, said that while McCarthy was from Ireland, he came to possess “the soul of a local.”

He died in August 1963 and was buried in Chacarita cemetery. The grave has not been located, though, and in that respect Paddy McCarthy resembles Patrick O’Connell, another Irish football émigré who went from unforgettable to forgotten.

O’Connell lay in an unmarked grave in north London for decades until the thorough research of Fergus Dowd and Alan McLean brought O’Connell back into our consciousness. Perhaps the work of Hurley, Murray and others will do the same for Paddy McCarthy.