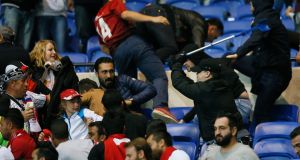 Trouble flares ahead of the start of the Europa League quarter-final first leg between Lyon and Besiktas in Lyon. Photograph: Robert Pratta/Reuters/Livepic

Football was left scarred by another sickening night of violence as supporters fought in the stands and fans raced to the pitch for safety before Lyon’s Europa League tie with Besiktas.

The first leg of the quarter-final was delayed for 45 minutes after punches, projectiles and firecrackers were thrown at the Parc OL. Both teams were forced to leave the field as fans spilled on to the playing surface before kick-off, with the Lyon president Jean Michel Aulas even going into the crowd in a desperate effort to calm tensions.

The incident came just 24 hours after some Leicester City supporters were filmed singing distasteful war songs and clashing with police before their Champions League quarter-final tie with Atletico Madrid.

Lyon went on to win the match 2-1 courtesy of two late goals from Corentin Tolisso and Jeremy Morel, after the former Liverpool winger Ryan Babel had put Besiktas ahead.

In the other quarter-finals, Ajax beat Schalke 2-0 in their home first leg while Celta Vigo edged ahead of Genk 3-2 at Balaidos. The return legs will take place next week.