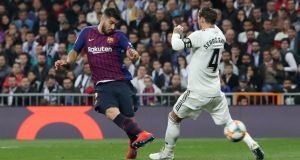 For FC Barcelona there is something about the Santiago Bernabéu. They came to the home of their greatest rivals needing a victory to take them to a record sixth-consecutive Copa del Rey final and while that is a task that would appear a titanic one for most teams, Barcelona are not most teams.

They have made a habit of silencing this stadium in recent years and, ultimately, they did so again on Wednesday night, two goals from Luis Suárez and an own goal from Raphaël Varane completing a 3-0 win to go with the 6-2, 4-3, 3-2, 4-0 and 3-1 victories they have collected here in the last decade.

If those were successes secured on a superiority that was often startling, this was different, but in the end, it was Barcelona heading through. They had struggled for an hour or so but they survived and prevailed. It wasn’t easy to explain, except through efficiency: Barcelona had two shots on target here and scored three times.

Nor was this about a familiar genius: so dependent on Lionel Messi lately, this time his influence was largely incidental; instead, it was the combination of Ousmane Dembélé and Suárez, neither of whom were especially sparkling in truth, that defeated Madrid. The Uruguayan has scored 11 goals in 13 clásicos.

Until the moment that Suárez got the first, a little after half-time, that appeared barely plausible. Madrid, who had the advantage of an away goal from the 1-1 draw in the first leg, had seemed more likely to go through. Their path to the final looked likely to pass through Vinicius, the 18-year-old who has done more than anyone else to revive their season, infusing it with life. But if the threat was always there, it went unrealised. Barcelona carried little threat but when they struck, they were deadly.

It had started with Vinicius’s flick sending Sergio Reguilón racing up the left early on. Ten minutes in and Barcelona had been turned for the first time, but not the last, Karim Benzema usually the man making sense of the runs around him. There was a penalty appeal as Vinicius dashed inside and tumbled; a shot struck just over; and another blocked by Marc-André Ter Stegen. Soon after, he dashed through and, although he was blocked again, he found Benzema whose weak shot hit Ter Stegen. Within a minute, the Brazilian hit one over on the turn. He had been just eight yards out.

By half-time, there had been no goals – and that’s not normal for a clásico. Nor was the fact that there had been just one shot from Barcelona, an Ivan Rakitic drive that was quickly closed down. But then, they got the goal. Jordi Alba paused and slotted the ball into the path of Dembélé. He pulled it back and Suárez was swifter and more alert than Sergio Ramos and, with the inside of his foot, steered a superb first-time shot into the net by the near post.

Madrid chased the equaliser, Sergio Busquets having to slide in to stop Vinicius after he had brilliantly turned away from Gerard Piqué and Reguilón sending a pass across the face of goal just beyond Lucas Vázquez before Dani Carvajal’s shot was saved and a brilliant run form Vinicius ended with his shot squirming wide.

Gareth Bale watched that from the touchline. He was introduced, to some cheers but a few whistles too. And then, within seconds, there was a cheer that came from the other end, where the hundred or so Barcelona supporters saw Nelson Semedo slot the ball up the right for Dembélé, whose sharp, fast low ball across the six-yard box sought Suárez but found the foot of Varane, diving in to cut it out.

Suárez hadn’t scored that but he did score again just two minutes later. Brought down by Casemiro, he got up and dinked in a Panenka penalty that ensured Barcelona reached the final. – Guardian