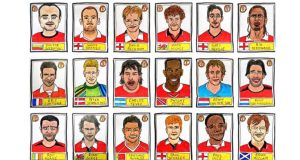 A husband and wife team that draw their own Panini stickers have been told that they can’t use the Manchester United logo and other intellectual property. Photograph: @CheapPanini Twitter

An “artistically challenged” couple who have raised £12,000 for charity by creating crude Panini-like stickers during international football tournaments, have been told by Manchester United to stop selling “wonky drawings” of their former players and club crest.

Alex and Sian Pratchett, who create images under the name Panini Cheapskates, came to attention when they set themselves the challenge of filling their World Cup 2014 Panini album with their own improvised – and always badly drawn – sketches to save money buying stickers.

Since then, the popularity of the @CheapPanini project has made the stickers collectable and their work is sold online. Well, all but one club’s work, that is. “Man Utd got in touch and made us stop selling our wonky drawings of their ex-players. If you’ve ordered one, we’ll be in touch,” the Pratchetts wrote on Twitter.

“We were surprised rather than upset or angry, but it is what it is,” Alex told the Guardian. “We fired off one or two tweets which maybe revealed our frustration a bit, but we don’t really have a moral high horse to get on because in the eyes of the law our childish yellow and red circle squiggle apparently looks enough like United’s crest to impinge on their trademarks.”

This is comfortably the stupidest thing we’ve ever done pic.twitter.com/mKU3ByQOIp

The couple tweeted one of their far-from-perfect images of the Manchester United club crest alongside the official one to highlight just how far off the mark they felt their crude imitation was from being “intellectual property theft”.

Since then, the innovative Pratchetts believe they have found a way around the club’s sticker shutdown. “A few of our followers suggested adding ‘football club’ to our version of the badge, as United had famously removed it from theirs not too long ago, but our handwriting just isn’t up to that,” said Alex.

“We thought it’d be nice to turn this nonsense around and do something good with it, so we removed the badge/splodge, renamed it ‘Man Red’ in tribute to various unlicensed football video game franchises, changed Wayne Rooney to ‘Ray Wooney”, Mark Hughes to ‘Spark Youse’, etc and relaunched it as a charity item, which went amazingly well and raised about £500 for Cancer Research.”

They have been contacted by one other club, but in that instance it was a request from West Bromwich Albion for the amateur artists to draw their former players so they could be sold for charity.

“We’re thinking the most sensible thing to do would be to pre-empt any further aggro along these lines and retrospectively give the ‘Man Red’ treatment to the rest of our back catalogue of terrible drawings,” adds Alex. “Which means we have a lot of wonky badges to erase and a lot of silly names to think up. Come to think of it, we should probably change our name to Panono.” – Guardian

Dublin come from behind to see off Galway in Division 1 dead rubber 18:01
TV View: Baby talk in the studio, rusty performances on the pitch 17:55
Ulster start fast to put the Dragons to the sword in Belfast 17:38
Here is your handy guide to sport on television this week 17:01
Southampton stop Everton in their tracks at St Mary’s 17:11