Michael Obafemi ruled out for rest of season with hamstring injury 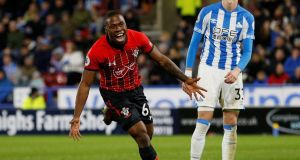 Southampton and Ireland striker Michael Obafemi has been ruled out for the rest of the season with a hamstring injury. Photograph: Ed Sykes/Action Images via Reuters

Southampton manager Ralph Hasenhüttl has described the hamstring injury he says will keep 18-year-old Michael Obafemi out for the rest of the season as “a disaster” for the teenager at what he suggested is a key period of development for the player in his professional career.

The Dublin-born striker was returning after a two-month absence with a hamstring injury in the 2-0 defeat by Arsenal on Sunday when he suffered a recurrence of the problem just 20 minutes after coming on as a half-time substitute.

It was sixth Premier League appearance of the season for the player who made his senior international debut for Ireland in the Nations League game against Denmark in November. In his previous club outing, against Huddersfield on December 22nd, he had scored his first top-flight goal.

Hasenhüttl said that they had taken considerable care not to rush Obafemi back but that the new injury was “a disaster” for him. “He was down, that’s for sure and we needed to take him in the arms a little.”

Answering a question that initially involved a number of players, the Austrian said that: “With Michael we took a long time to reintroduce him. He didn’t start from the beginning [against Arsenal], only the second half because we knew that it was important for him to take a small step at first.

“But it’s a completely different thing, training for two weeks with the first team squad and playing in the Premier League; it is a much higher intensity. It’s a big blow. The end of the season, he will not play.

“It is not about putting pressure on an 18- or 19-year-old. If we had a big problem because an 18-year-old or 19-year-old striker was not in the team then we really would have a very big problem. We will find other solutions but the worst thing is for himself.

“Another big injury at this age when you want to play, your want to get experience, you want to take the next step in your development – it doesn’t help him a lot in his development.

“It’s a big problem for his career of playing professional football. For him it’s a disaster.”

Had he been fit, Obafemi was likely to feature in Mick McCarthy’s squad for the opening European Championship qualifier against Gibraltar, which is to be named on Thursday of next week.

McCarthy has, of course, already lost Declan Rice after the midfielder opted to declare for England, while Netherlands-based midfielder Dan Crowley has said that the paperwork on his international transfer to Ireland has been submitted.

McCarthy has since said that Noel King has made arrangements to go and see the 21-year-old from Coventry, who was previously at Arsenal, in action for Willem II.