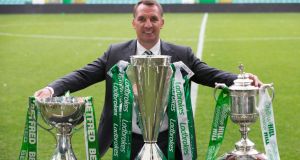 At least Brendan Rodgers is consistent. Upon exiting Celtic, thereby causing uproar among an element of the club’s support, the 46-year-old managed to retain sentiment from his arrival in Glasgow in May 2016. And with a straight face, at that.

“From the moment I walked into Celtic Park I have been living my dream and, together with the players, staff and supporters, we have been on an amazing journey, which I will never forget,” Rodgers insisted.

Whether any manager would opt to end a “dream” potentially 14 games from a third clean sweep of domestic trophies is open to debate. In part, this points to a theme obvious from last season onwards; glory in Scotland wasn’t enough to hold the attention of Rodgers, not least when a return to the Premier League became a viable option. Leicester’s interest in the former Liverpool manager had lasted for months.

North of the border, there has already been an underplaying of how decent a job Rodgers has walked – or run – into. It had been obvious that he couldn’t swap Celtic for anything higher up the Premier League ladder. This was a perfect fit.

That Rodgers placed such stock in Celtic being “his” club means that the upset as felt by the Scottish champions’ support is understandable. It also undermines the hero worship afforded to the man from Carnlough in Co Antrim, plus the flawed sense that Celtic’s ongoing pursuit of 10 titles in succession has a wider resonance than even their own executive believes.

The reality is that those in far more competitive environments in Scotland shrug shoulders at recurring success by the biggest club there. Rodgers, whose biggest pre-Celtic achievement was playoff success with Swansea in 2011, absolutely revelled in the adulation and delivery of seven trophies.

His talent will have been enhanced by presiding over a club where the demand to win every game far outstrips that of Leicester, just as coaching a team which commonly enjoys vast chunks of possession brings its own distinct challenges. And believe it or not; it is possible to be a poor manager of Celtic; see Tony Mowbray.

That Rodgers implemented a relentless approach to domestic football is beyond dispute. That he oversaw the development of talent – Callum McGregor, James Forrest, Kieran Tierney and Ryan Christie the most obvious examples – represents his key Celtic success. Early this season, with Celtic struggling, Rodgers called a meeting during which he asked players to anonymously list key thoughts regarding every one of their team-mates.

Each individual was later issued with the detail as applicable to them; Celtic’s form was to improve, in what provides a nod towards Rodgers’s management skill. Believe it or not, it wasn’t always all about him.

A deeper story had played out by then. Rodgers’s disquiet with the Celtic board regarding what he viewed as the failure to adequately back him in the summer transfer window disrupted relationships to a point from which they could never fully recover. Dermot Desmond, Celtic’s key shareholder, places such faith in the chief executive, Peter Lawwell, that Rodgers had no scope to win the battle, never mind a war.

In reply to Rodgers’s unrest, his paymasters could readily point towards a string of poor forays into the transfer market, as costing Celtic millions. During Rodgers’s tenure, Celtic’s staff costs rocketed to close to £60 million per year; 30 times some of their domestic opponents. It would be no shock to see that spending curtailed now. Lee Congerton, hired and vehemently defended by Rodgers, has presided over an inauspicious recruitment run.

Rodgers puts a brave face on defeat at Valencia last week that brought a premature end to Celtic’s involvement in European competition.

A fiscal gulf – no fault of Celtic’s, of course – didn’t halt wild celebration as Scottish success continued. Rodgers rather enjoyed being the big fish in a small pond, where he wouldn’t think twice of offering advice to other clubs or delivering Powerpoint presentations to out-of-work coaches. Yet there had been sufficient indication, even a year ago, that the Scottish scene – which Rodgers began to refer to as “up here” – wasn’t stimulating enough for a coach who regards himself as being in the top tier.

Against this backdrop, Rodgers’s failure to make proper inroads in European competition was strange. It also undermined what he could produce against Hamilton or St Johnstone, where annual wage bills equated to Rodgers’s own salary. From 22 European ties “proper”, Rodgers mustered just five wins. Whereas Neil Lennon and Gordon Strachan – twice – propelled Celtic to the last 16 of the Champions League, Rodgers found himself generally helpless against serious opposition.

A myth soon developed in respect of this – as happily enhanced by Rodgers – whereby his dreamy, free-flowing football came at the cost of effective pragmatism. In truth, this Celtic team continually lost dreadful goals in Europe, a scenario not intrinsically linked to systems or style of play at all. They didn’t attack with vigour. Defeat to AEK Athens at the qualifying phase of this season’s Champions League represented a dire result; the Greeks didn’t claim a point from subsequent group games.

In almost three years, Rodgers didn’t source a formidable central defensive pairing for Celtic, as will require attention this summer. His beholding to Scott Brown was routinely exposed outside of Scotland’s goldfish bowl. A failure to properly trust in Celtic’s academy players, the best in Scotland by a distance, meant an over-reliance on expensive loan deals.

Rodgers has points to prove back in the Premier League. That is partly on account of the wounding circumstances by which he left Liverpool but also, whisper it, due to shortcomings as illustrated in Glasgow. Rodgers was very good for Celtic but it would be a chronic error to deny the reverse is also true. The club has no serious cause to mourn his loss. – Guardian