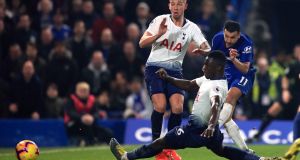 Maurizio Sarri, in time, may point to this as the victory which breathed life into his tenure as Chelsea’s head coach. The moment when all the doubts that had infected his team over the winter months gave way to newfound belief in the Italian’s methods. That at least will be the long-term hope. In the meantime, he could merely bask in a victory over bitter rivals which has earned him significant respite after a desperate few weeks.

Tottenham, their game as troublingly disjointed as in defeat at Burnley a few days previously, ended embarrassed here with Sarri, fidgeting on the sidelines, finally able to delight in timely success. His decision to omit Kepa Arrizabalaga from his starting line-up had been a show of strength, and a gamble clearly worth taking given the spirited manner in which his players performed.

They merited the late slice of luck which saw Kieran Trippier put through his own net to double their lead and ensure the top four remain only three points away. For Spurs, unable to find a way beyond Willy Caballero, form has suddenly stalled.

What had initially been dismissed in public as an innocent “misunderstanding” at Wembley had actually left Kepa around £190,000 out of pocket and twiddling his thumbs on the substitutes’ bench here, with his own standing among the club’s fanbase having clearly been damaged by the whole affair. The 24-year-old was heckled by one fan near the mouth of the tunnel as he departed the turf after the warm-up, with his name booed by others when it was read out over the Tannoy prior to kick-off. That contrasted markedly with the warm reception granted Caballero.

The omission of the world’s most expensive goalkeeper had in effect prolonged a story Chelsea had initially hoped to snuff out, though this was a head coach attempting to reassert some authority in a critical fixture. “It’s my choice, and a message for my group,” explained Sarri. “That we are a group, and not 25 players.”

Caballero had not featured in the Premier League since Huddersfield secured their top-flight survival in this arena last May, an occasion even supporters of the Yorkshire club would admit feels an age ago. The veteran would have to wait almost half an hour for any meaningful involvement, leaping to punch away Trippier’s dangerous free-kick.

In truth, he must have welcomed being a mere spectator through much of that first half. All the early energy and urgency had been Chelsea’s, the hosts pouring forward eagerly to unsettle their visitors with N’Golo Kanté his usual blur of interceptions in midfield to set the team’s tempo.

Spurs, as if unnerved by that unexpected loss at Turf Moor, seemed half asleep in comparison. Hugo Lloris’s wayward pass, presenting the ball to Pedro just outside the Tottenham penalty area, summed it all up. The Spaniard found Eden Hazard who, in turn, set up Gonzalo Higuaín only for the striker to whip his shot wide of the far post.

The Argentinian, initially benched at Wembley, had already struck an upright by then, latching on to Moussa Sissoko’s poorly timed header to shin a volley on to the post with Lloris motionless. How Sarri, as agitated as ever, must have craved an early reward to which his side could cling.

Instead, inevitably, Spurs eventually found some rhythm of their own. By the time Harry Winks was belting a shot from distance over Caballero and on to the crossbar just before the break, they had wrested back the initiative with Son Heung-min, looking fresher than Hazard, unsettling Marcos Alonso.

The Spaniard’s inclusion had constituted something of a surprise given his recent slump in form. Tottenham must have sensed vulnerability.

Son had seemed their likeliest source of reward, with a ring-rusty Harry Kane invariably outnumbered and, in his frustration, squaring up to David Luiz and then César Azpilicueta in a flashpoint which epitomised the underlying snarl of this fixture.

Sarri, so desperate for a breakthrough, had been preparing to introduce Willian as the hour-mark approached only for his substitution to be interrupted yet again. This time, however, he had cause for celebration at the delay in proceedings.

Chelsea had been probing, little more, through the opening quarter of the second period when Hazard, visibly tiring, spread the play to Azpilicueta with the full back’s pass liberating Pedro beyond Ben Davies. The winger had reached the byline and wriggled back inside a momentarily flustered Toby Alderweireld to catch sight of goal, but Lloris should still have blocked the resultant shot.

Instead, the effort clipped the inside of the goalkeeper’s right ankle to billow the net inside the near post. The manic celebrations on the home side’s bench might have been replicated by Pedro’s superb challenge to steal the ball from Christian Eriksen moments later just as the Dane was threatening to pilfer a swift equaliser.

Kane, fluffing a volley at Eriksen’s centre, would miss a more presentable opportunity, but Spurs had been marginally off kilter all evening. They pushed frantically towards the end, but too many of their attacking forays were rather shapeless and desperate, and composure had long since drained away.

Trippier, collecting Olivier Giroud’s flick on with Willian tearing at the right back, duly compounded their misery by placing a back pass wide of the on-rushing Lloris, with the ball trickling agonisingly into the empty net. – Guardian

Second half goals get Cavan over the line against Fermanagh 23:21
Ulster equal 21-game unbeaten home record with Cheetahs win 22:43
Paul Mannion pounces as Dublin see off unlucky Donegal 22:08
Laois stay safe with King to the fore 21:01
Dan Martin climbs to second in Portugal 20:39