McCarthy admits recruiting players to Republic’s cause not easy 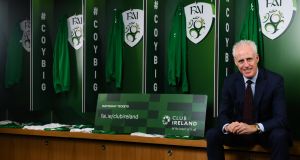 Mick McCarthy at the Aviva Stadium where the FAI launched its new 3, 5 & 10-year Premium Level tickets – “Club Ireland” – ahead of the Republic of Ireland’s Euro 2020 qualifying campaign. Photograph: Stephen McCarthy/Sportsfile

Mick McCarthy says he accepts part of his job these days is to recruit players to the Irish cause but admits to wishing some of those he has identified as being of interest were just a little more proactive in the process.

Speaking about the situation for the first time since West Ham midfielder Declan Rice finally declared his intention to play for England, McCarthy said attempts to clarify the intentions of Patrick Bamford and Nathan Redmond have not yet proved successful.

The Leeds striker, who previously represented Ireland at underage level before switching to England, had suggested a meeting that would include his father but that had fallen through and despite a couple of other efforts to arrange a face to face chat, nothing has happened as yet.

With Redmond, he said, there have only been preliminary contacts with the player’s agent to date and McCarthy admits to still being unsure whether he can progress the situation or not.

“I don’t know,” he says. “I’ve been speaking to the agent and trying to meet him but I think Nathan Redmond is having a particularly good season despite where Southampton are.

“He has played for the [England] 21s?” he asked only to be told that he has actually played one game for the senior team, coming on for just short of a half an hour against Germany two years ago.

Moments earlier McCarthy had expressed the opinion that a senior cap should tie a player to a country but, clearly prepared to play the rules, he seemed undeterred as he suggested: “Maybe he still has designs on playing for them, I don’t know. I haven’t asked him the question because I haven’t spoken to him. I’ve been trying to meet him.”

Will Keane, meanwhile, has reacted more positively to the interest, the manager revealed.

“I asked him and he went, ‘yeah I’d love to’. No shit Sherlock! ‘Yeah, I want to do it’. He’s in the process but has done his hamstring and has six weeks out now.”

Asked if he finds this increasingly significant aspect to the job a frustration, he sought to shrug it off but acknowledged that things have changed since his first stint in charge ended back in 2002.

“That’s part of the gig, isn’t it? We still have good players but if I can add to them then it’s my job to do that. I’m not getting frustrated by doing it but there comes a time when someone has to tell me that ‘I want to play’.”

Asked about Rice, he said that the 20-year-old’s decision had not come as a surprise.

“I’d known for two months that he wasn’t joining us,” he says, “all I needed was it confirming. You might say ‘How did I know that?’ I just got a feeling, having met and spoken to him. All he had to do was say: ‘yeah I’m staying with you guys, I’m playing’. Once he hadn’t done that when I met him, I was very doubtful.”

Since starting, McCarthy has also been checking on the availability of some of the more established squad members including the likes of Glenn Whelan and Daryl Murphy, both of whom, he says, have suggested they will answer the call if one comes.

David McGoldrick, he confirmed, will be in the squad he names next week for the opening qualifying games, away to Gibraltar (he heads there today to assess their artificial pitch) then home to Georgia next month with the manager observing that: “David will be in the squad, no doubt about that. If there’s a better striker that we’ve got at the moment…[he] has been different class for Sheffield United, who are second in the Championship.”

His options in that department have been hit by the loss, due to a hamstring injury of Michael Obafemi, but McCarthy says that he was pleased last Saturday by Sean Maguire’s performance in Preston’s win at Millwall.

“Yeah, I’m really disappointed that Obafemi is injured, that’s a real blow to a kid of 18, but on the upside, Sean Maguire, somebody who had been struggling with his hamstring, has been playing very, very well and was outstanding at Millwall.”

McCarthy admitted to having been slightly underwhelmed when he saw Maguire playing on the left in another game recently but, he said, “I’m glad that I went and watched him play up front as a lone striker against Millwall because his movement and his pace was excellent….everything about him; he played very well.”

1 Connell losing touch with the club championship is the real tragedy of Normal People
2 Ghosts and goalposts: The soul of street football in Dublin’s Gloucester Diamond
3 Sideline Cut: Vignette shows why Bird is the true shark in The Last Dance
4 Anfield and Cheltenham show sports again lacking in looking after their own
5 Shane Ryan: Shark attacks and gruelling shifts on a Covid-free Atlantic mission
Real news has value SUBSCRIBE
Crossword Get access to over 6,000 interactive crosswords