Liverpool blow away creeping fears as they annihilate Watford 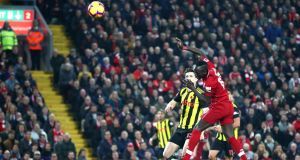 Liverpool may have felt the pressure of leading the title race in recent weeks and lost their attacking verve along the route. Against Watford they simply revelled in it, however, recording their biggest win of a Premier League season that Jürgen Klopp hopes may prove the breakthrough act for generations to follow. His team were clinical, insatiable and unstoppable as they maintained their place on the summit.

Two goals apiece from Virgil van Dijk and Sadio Mané, his second a quite astounding finish, plus one for Divock Origi inflicted another heavy Anfield defeat on Watford, who have lost their past three visits here 5-0, 5-0 and 6-1. It was a result and performance that blew away creeping fears about Liverpool losing their edge and composure just as the season reaches its critical phase. It was a result and performance that told Manchester City they will be difficult to dislodge from the top.

Klopp was passionate in his conviction that Liverpool’s form and advantage over Manchester City deserved greater appreciation, and enjoyment, on the eve of Watford’s visit. He was well within his rights to say so. His argument that expectancy was fuelling the problem, however, could not gloss over the need to improve on Sunday’s display at Old Trafford and a sequence of three draws in the previous four league games. A strong, energetic and incisive start against a Watford team beaten once in 11 matches was precisely what the league leaders required.

With Roberto Firmino absent with the ankle injury sustained at Manchester United, Klopp handed Origi his second start of the Premier League campaign. Crucially, he stationed the Belgium international on the left and gave Mané opportunity to wreak havoc through the centre. It was an invitation he devoured. Other changes from Sunday, James Milner returning to midfield and Trent Alexander-Arnold recalled at right back, were also key in extending Liverpool’s unbeaten league run here to a commanding 35 games.

Milner signalled the kind of night that lay in store for the visitors when he charged down an early clearance from Ben Foster. The Watford goalkeeper escaped on that occasion, the ball looping into the air and his embrace, but was convincingly beaten when a carefully constructed Liverpool attack released Mané for the first time.

Liverpool’s centre forward for the night was involved at the start of the move with a lay-off to Milner on the edge of the area. By the time the ball arrived in the box via an immaculate first time cross from Alexander-Arnold the Senegal international had peeled into space between Watford’s central defenders. Foster was left waving at thin air as Mané’s powerful header flew into the top corner.

Quality deliveries from Alexander-Arnold were a feature of Liverpool’s first-half dominance as the young defender showed his manager what was lacking at Old Trafford. Mohamed Salah’s tormenting of Adam Masina and Craig Cathcart was another. Both played their part in a second goal of impudent class from Mané.

A strong run from Salah was halted inside the Watford area but Liverpool remained in possession through Georginio Wijnaldum. He teed up Alexander-Arnold for another precision cross into Mané whose first touch shifted the ball away from goal. No bother. He simply back-heeled his second touch up and over the advancing Foster and into an empty net. The gasp that preceded the roar said everything about the finish.

Watford broke sporadically through Gerard Deulofeu but with the Spanish forward more erratic than clinical, as he was when scoring a hat-trick at Cardiff on Friday, Alisson was not tested in the Liverpool goal before the break.

The hosts could have extended their lead comfortably. Foster diverted a Salah shot on to a post from a tight angle following another piercing run by the Egypt international, who was also just unable to connect with yet another Alexander-Arnold cross that flashed across goal, and Andy Robertson volleyed wide from a fine move involving Origi and Salah.

Fear stalked the Watford defence each time Salah received the ball in space, a lesson they failed to heed from United’s approach on Sunday. Liverpool’s leading scorer ghosted past Masina early in the second half and attempted to chip Foster at his near post only for the goalkeeper’s fingertips to intervene.

Mané almost had his hat-trick when picked out inside the area by Origi only for Cathcart to deflect his shot over the bar. Wijnaldum also drove straight at the Watford goalkeeper as Liverpool carried the greater, and only, threat throughout.

The visitors did enjoy more possession in the final third after the interval but were unable to exert any pressure from open play or set-pieces. Javi Gracia’s decision to withdraw Troy Deeney and Deulofeu spoke volumes about their attacking prowess.

Inevitably, it was Liverpool who struck again when Origi capped a promising return to the starting line-up with a fine finish. Robertson found the striker lurking unmarked on the left wing with Watford defending deep and in numbers. Undeterred, Origi darted into the area and away from two defenders before cutting a low and emphatic shot back inside Foster’s near post.

Van Dijk made it four, and Alexander-Arnold a hat-trick of assists, when he powered home a close-range header from the youngster’s free kick. He celebrated his second goal at Anfield with a fist-pumping celebration in front of the Kop and followed that up with a glancing header from Robinson’s cross as Liverpool savoured their view from the summit. – Guardian