Kepa Arrizabalaga dropped to bench for Chelsea’s clash with Spurs 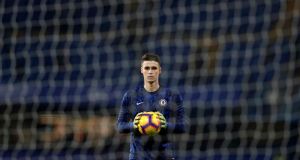 Chelsea goalkeeper Kepa Arrizabalaga warms up at Stamford Bridge ahead of the Premier League match against Tottenham Hotspur. The Spanish player has been dropped to the bench with Willy Caballero starting. Photograph: Adrian Dennis/AFP/Getty Images

Kepa Arrizabalaga was dropped to the substitutes’ bench for Chelsea’s Premier League clash with Tottenham after his refusal to be substituted in Sunday’s Carabao Cup final.

The 24-year-old – at €80 million the world’s most expensive goalkeeper – was fined one week’s wages and apologised after refusing to go off with penalties looming at Wembley, sending head coach Maurizio Sarri apoplectic.

Willy Caballero, who had been readied to go on against Manchester City, will deputise for Kepa at Stamford Bridge on Wednesday.

The incident was initially described as a “misunderstanding”, but Kepa was subsequently fined by the club’s board, with the sanction going to the Chelsea Foundation charity.

Sarri on Tuesday said the situation was “finished” and “we don’t want to kill him”, but the decision to omit Kepa from the starting line-up extends the fallout.

Sarri insisted he would take a decision in the best interests of his squad.

“It will be a decision for the group. For all the players,” Sarri said on Tuesday.

“I want to send a message to my group. The message could be: Kepa is on the pitch or Kepa is out of the pitch.

“I have to decide what is better for my group.”

Shortly before the match, Sarri told BT Sport: “It’s a choice. It’s a message for my group. That we are a group and not 25 players. It’s my choice.”

Chelsea made four changes to the side which lost 4-3 on penalties to City at Wembley as the Blues played their first league game since the 6-0 loss to City at the Etihad stadium, a result that left Sarri’s position as head coach precarious.

Spurs, who lost at Burnley on Saturday, made four changes, with Serge Aurier, Juan Foyth, Danny Rose and Jan Vertonghen out and Kieran Trippier, Davinson Sanchez, Ben Davies and Erik Lamela coming in.