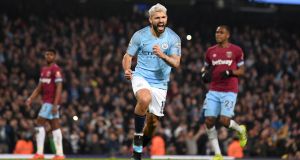 Sergio Agüero celebrates after scoring a penalty for Manchester City during the Premier League match against West Ham at the Etihad stadium. Photograph: Laurence Griffiths/Getty Images

As a measure of what an unexpectedly difficult night this was for Manchester City, it was the first time all season they have failed to score twice or more in any game at their own ground. No other side has managed that kind of record over a 15-game period in the top division since Tottenham in 1965 and, in the case of Pep Guardiola’s team, don’t forget that their previous assignment here involved a 6-0 rampage against Chelsea.

At this stage of the season, however, they will not mind too much that their latest victory was a much more prosaic affair featuring a decisive penalty that was harsh, in the extreme, on a willing but limited West Ham side.

On the balance of play, there could be no doubt City were the superior team, particularly in the second half. All the same, their former manager, Manuel Pellegrini, could conceivably have seen his current team emerge with a battling draw but for the game’s decisive moment just before the hour mark, when the substitute Bernardo Silva went down in the penalty area and Sergio Agüero was handed the chance to score his 25th goal of the season.

Agüero’s coolness from 12 yards maintained Guardiola’s immaculate record in all his matches against West Ham and, more importantly, ensured City kept up the pressure on Liverpool at the top of the table. Yet it was a struggle at times for the reigning champions.

To put it into context, Guardiola had won all six of his previous encounters against West Ham, with an aggregate score of 22-3. Pellegrini, returning to the stadium where he won a Premier League title, also had to make do without Marko Arnautovic, who had a virus, and a list of absentees that meant Ben Johnson earning his first Premier League start. Johnson, a 19-year-old full back, is the cousin of Ledley King and nephew of Paul Parker. The family clearly place great importance in the art of defence and that was probably just as well given the amount of time West Ham had to spend in retreat.

Not that City had it all their own way. Far from it, indeed, judging by Guardiola’s body language at times, staring out anxiously from his place in the dugout. At other times, he move to the edge of the pitch, with his arms folded or his hands shoved into his pockets.

Guardiola has never been very good at disguising his feelings: he looked dissatisfied and, at times, the crowd sounded it, particularly when Riyad Mahrez was straying offside or misplacing the sort of passes that wearers of City’s colours are not supposed to get wrong. This was Mahrez’s first start in a league match since December 30th and, though Raheem Sterling and Bernardo Silva were entitled to a rest, it was not a good night for the club’s record signing, looking conspicuously low on confidence.

Mahrez did at least contribute City’s only shot on target during an opening half that concluded with cries of “ole” from the corner of the stadium where the away supporters were enjoying the rather unexpected sight of some West Ham keep-ball. A bit cheeky, perhaps, when the passing statistics were so heavily in favour of the home side and West Ham’s forward line, led by Andy Carroll, had barely put together a noteworthy attack.

Even so, the visitors were entitled to be satisfied with the way the game was panning out. It was strange to see City look so short of attacking ideas, particularly on their own ground, and though it would be an exaggeration to say there was a genuine sense of alarm at half-time, it was clear they needed to improve.

The same could be said for Samir Nasri, who was barely involved on the night he returned to face his former club. Pellegrini replaced him with Manuel Lanzini during the break and, five minutes after the restart, the substitute set up Carroll for West Ham’s first chance of the night. It was a good chance, too – by far the clearest opportunity of the evening until that stage. Carroll was at full stretch when he connected with Lanzini’s cross but Ederson’s flying save spared City from going behind.

For West Ham, that was a costly miss. Bernardo Silva, a 58th-minute replacement for Leroy Sané, had only been on the pitch a minute when he darted into the penalty area and tried to find a way past Felipe Anderson. Declan Rice, who was being watched by the England manager, Gareth Southgate, was also tracking the City player and, if there was any contact from Anderson, it was minimal.

Perhaps it had entered the mind of the referee, Stuart Attwell, that he had just waved away another penalty appeal, this time for a challenge on Agüero. Whatever the referee’s thinking, it was still a dubious decision. Silva appeared to stumble, rather than actually being fouled, and the sight of him punching the air at the award of the penalty will not have lessened West Ham’s feelings of injustice. Agüero stepped forward and put the penalty to the left of the goalkeeper Lukasz Fabianski. – Guardian