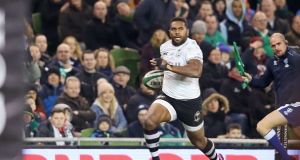 Fiji would be one of the teams added to an expanded Rugby Championship. Photograph: Getty Images

World Rugby has extended its deadline for the Six Nations and Rugby Championship unions to take the concept of a Nations Championship a step further to next week.

The unions had been given until Friday to agree to sign up to due diligence, which allows a mutual examination of books. It would not commit a union to joining the Championship, which World Rugby would like to start in 2022.

The league would involve two championships augmented by matches between countries in the two hemispheres in the summer and autumn Test windows, culminating in a final. A drawback for the Six Nations has been the issue of relegation and the threat of financial ruin it would bring.

Under World Rugby’s plan the two championships would be underpinned by second divisions made up of nations currently classified as tier two. The aim is to give them something to which to aspire, although promotion would most likely be through a play-off against the team that had finished bottom.

The Rugby Championship sides are not enthusiastic about the idea of relegation but they would initially be insulated with Fiji and Japan joining their tournament to take the number up to six. Italy, Scotland and Ireland are set against it but all the unions last week met representatives from Infront Sports and Media, the Swiss company that would be World Rugby’s commercial partner in the venture.

Infront has said the league would generate £5bn over 12 years. The unions were told they would be financially better off than they are now even if they were relegated and while the Six Nations have spoken to four companies about aggregating their broadcast and commercial deals, they would forfeit a quarter of their profits each year in return for a lump sum up front.

The Rugby Championship unions have been more receptive to the idea which would put them on a more even financial footing with Europe and help them keep their leading players at home.

“It is not quite accurate to say the south wants the league and the north doesn’t,” said Steve Tew, the chief executive of the New Zealand Rugby Union. “The reality is that we have a great idea but it comes with complications that need analysis.

“We have not said yes or no to anything. Good on World Rugby for bringing a bid to the table that provides us with a reference point. And we’re going to work it through. You would fear relegation if you have a poor season when it is on the table, but if teams don’t go down, no one comes up and you have everyone in place for ever. That’s clearly not something we all want.”