Bundee Aki returns to Connacht side for Challenge Cup quarters 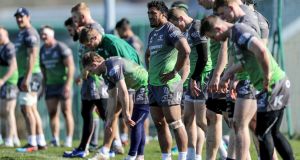 Bundee Aki has returned to the Connacht starting team for their European Challenge Cup quarter-final against Sale Sharks on Friday night. This will be Aki’s first start for Connacht since featuring in all of Ireland’s games in the recent Six Nations Championship.

The Connacht side will be captained by hooker Tom McCartney, who makes his 100th appearance for the province. Carty also returns to the starting line-up, having come off the bench in the home win over Benetton last weekend. Alongside Carty will be fellow international Kieran Marmion who also featured off the bench last time out.

In the back three, Darragh Leader is named at full back with Cian Kelleher and Niyi Adeolokun on the wings. Adeolokun makes his first start since November, when he picked up an arm injury against the Toyota Cheetahs in Bloemfontein.

Aki’s inclusion in the midfield sees him form a partnership with the versatile Kyle Godwin.

Up front, props Peter McCabe and Dominic Robertson-McCoy join McCartney in the front row. While in the second row Gavin Thornbury continues his return from injury alongside James Cannon.

In the back row Eoghan Masterson and James Connolly are named at blindside and openside respectively, with 22 year old Paul Boyle at number 8.