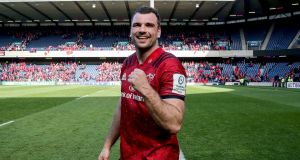 Conor Murray has robustly defended his teammate Tadhg Beirne from what has been disparagingly referred to as Munster’s ‘Neymar moment.’

The Irish lock was walking towards play when he received a shoulder from prop Pierre Schoeman, forcing him to go to ground, breaking play and earning Munster a penalty.

The penalty ultimately led to Keith Earls bagging his second try and, along with Bleyandaal’s conversion, secured the win by four points to send Munster into the semi final.

A number of commentators including former Irish centre Brian O’Driscoll were critical of the Munster secondrow, O’Driscoll commenting that ‘it isn’t a good look’ for the sport.

“Yeah, looking back on it. The first time I saw it was in slow motion and it looks like he went down quite easliy. He did,” said Murray.

“But real time, it’s a penalty. It’s more than an elbow tip - it’s a shoulder. Pierre Schoeman eyes up Tadhg and gives him a shoulder. He’s a big man. It’s definitely a penalty, by the letter of the law.

“We’re aware there’s a bit being made of it, ex-players have talked about it but maybe if he didn’t stay down the ref might not have gone back and had a look at it.

“But it was a penalty, it was a catch up defender that you see so often. . . I’ll give you Tadhg’s number if you want to ask him how badly he’s hurt.”

Murray agrees that it was a huge turning point in the match, which ultimately helped Munster come away from Scotland with a European semi-final booked against Premiership side Saracens.

For professional players the letter of the law sometimes works for them. But Murray is unfazed about what interpretation anyone else holds.

“I didn’t see it at the time,” confessed the Irish scrumhalf. “I was obviously playing and to get that penalty - (Jaco) van der Walt was going to kick that from 40metres. That was going to be a big moment in the game. They’d have gone six points up.”

Referee Pascal Gaüzère reversed the penalty decision after Beirne fell to the ground.

“So, to have that reversed was great from our point of view. Anyone from any team, if that happened for you you’d be happy for it.

“You’d have to ask Tadhg how badly he was hurt, I didn’t have interest in asking him. We’d just won the game. I was happy enough with that.”