Munster locked and loaded for the visit of Cardiff Blues 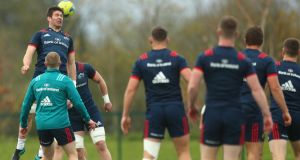 Peter O’Mahony will captain Munster as they take on the Cardiff Blues in Cork on Friday night, knowing a victory will secure a place in the Pro14 play-offs.

Johann van Graan has made six changes to his starting line-up from the side which narrowly beat Edinburgh in the Champions Cup quarter-finals last weekend.

One of those is enforced by injury, with Tyler Bleyendaal replacing Joey Carbery at outhalf. Conor Murray retains his place at scrumhalf.

Mike Haley comes into the back three alongside Andrew Conway and the hero of Edinburgh Keith Earls, while Rory Scannell and Chris Farrell continue in midfield.

Up front Dave Kilcoyne, Kevin O’Byrne and John Ryan start in the frontrow, with Billy Holland and Jean Kleyn in the engineroom.