Matt Williams: Time to outlaw the cheats and save our game 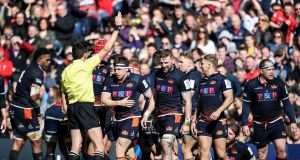 Referees need help in policing the offside line as the current system is simply not working. Photograph: Dan Sheridan/Inpho

Like the citizens of a corrupt country where laws are ignored, the rugby world has come to accept that our referees are not enforcing the laws that keep defensive teams onside.

The “offside” cheating is on a scale so vast it is time for World Rugby to act.

Last weekend was the final straw for me. After watching many games in both the Heineken Cup and Super Rugby, I have decided to call it out for what it is.

Every team is cheating, and our officials are doing nothing about it. In every game I watched, every team was deliberately and purposefully offside.

At the lineout the defending backline is 10m back from the line of touch, which is the spot were the attacking hooker stands.

Usain Bolt’s fastest time for zero to 10m was 1.85 seconds. We know it usually takes between 0.9 and 1.5 seconds for the ball to leave the lineout and be caught by the attacking outhalf. Yet most defending back lines are already past the line of touch and tackling the ball-carrier in under 1.4 seconds.

They are either much faster than the greatest 100m sprinter of all time, or they are cheating.

So why are they not being penalised?

At the lineout the referee firstly must adjudicate that the hooker’s throw is between the inside shoulders of the forwards. He then has to check that the catcher is not interfered with, and that the 16 forwards remain behind the ball and onside. Only then, as the ball is delivered to the scrumhalf, can he watch the backs, who have developed superpowers and can now run 10m-plus in under 1.5 seconds.

At the tackle our referees have to go through a long checklist in their decision-making. Firstly, is the tackle legal and not dangerous? Does the tackler roll away? Does the ball-carrier place the ball immediately? Do the next arriving players enter the ruck through the “gate”, which is the length of the ball-carrier’s body? Is it now a ruck and not a tackle?

While the referee considers his mental checklist, often with his back to the defenders and his eyes towards the ruck, the “rushing” defensive systems use the third or fourth defender to set the line speed. He sees the referee is not looking and is often a metre or more offside.

This is exacerbated by the defending team not putting bodies in the ruck so the defenders can start even closer to the attackers.

Ruck after ruck, game after game, week after week, every team is offside. This repeated unchallenged cheating is corrupting the style of our game.

The systematic cheating we are witnessing is not from poor refereeing

At junior age level it is an epidemic. I strongly believe we are not seeing as many creative attacking players as we did in the past because defenders in junior rugby are copying their senior heroes. So a creative young outhalf has a tiny amount of time with ball in his or her hand before a defender makes contact with them. Their creativity is being stifled.

If attacking teams have the time for three or four passes, space will be created and attacked. The entire concept of a “rush” defence is to deny the time and space that allows that third or fourth pass. With the defenders standing offside the attack does not stand a chance.

How many times in recent months have we seen attacking teams lose ground when they have possession. I witnessed the Waratahs drop 20m to Wellington; Ireland forced back 25m by Scotland; Edinburgh drop 15m to Munster; and Ulster lose ground to Leinster. The list goes on.

The solution is simple. The system of a single on-field official to adjudicate on all matters is simply not working. It is an obsolete 20th century concept that is no longer viable.

In all professional matches an assistant referee is required on the field whose sole task is to stand in the defensive line and adjudicate the offside. Rugby League has done this for years. At the ruck, to negate defending teams not putting players in the ruck, the offside line for all defenders will be one metre behind the last player from either side in the ruck.

Don’t tell me we currently have “assistant referees”. Watch any professional game and it is obvious that the current refereeing structure does not work. The cheats are winning.

The systematic cheating we are witnessing it is not from poor refereeing, but from a failed on-field officiating system.

Add an on-field assistant referee for offside, and after a month of bitching, whining and a mountain of penalties the problem will disappear. If officials police the law, the law will be obeyed.

This systematic cheating by all teams must be stopped.