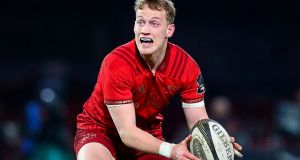 With three regular season games remaining, the Pro 14 gets serious. Munster can lock down play-off status while helping Connacht, away to Zebre on Saturday, retain third place in Conference A.

Accordingly, Johann van Graan names a fully available panel – Joey Carbery is g hamstrung again and Jack O’Donoghue has yet to recover from concussion – with a view to dislodging Glasgow from the guaranteed home semi-final slot providing Ulster get a result in Scotstoun (also kicking off at 7.35pm). Munster are three points behind the 2015 champions, so every game matters from now on.

With the Champions Cup semi-final against Saracens in Coventry two weeks away, Tyler Bleyendaal is the man in position to guide Munster to league and European glory. That plan did not work so well two years ago – hence the recruitment of Carbery – but at least van Graan can use this outing on Cork’s 3G surface as a dry run for the Rioch Arena’s hybrid grass pitch.

There is some caution in the selection, with Niall Scannell, CJ Stander and Tadhg Beirne – who Conor Murray felt obliged to defend this week following his penalty winning antics against Edinburgh – held on the bench.

Despite Cardiff’s impressive form – five wins from six – a clean victory is expected as Munster and van Graan position themselves to clear the semi-final hurdles they have stumbled at in recent seasons.