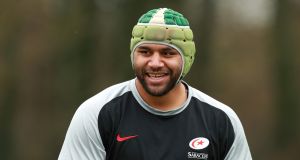 Billy Vunipola and his England team mate Ben Te’o have apologised to the rest of their national squad. Photograph: David Rogers/Getty Images

Eddie Jones will not hold the breach of team protocol against Ben Te’o and Billy Vunipola when selecting his World Cup training squad, after the pair had to apologise for returning late to the team hotel.

Te’o and Vunipola returned to England’s hotel in Chiswick in the early hours of Sunday morning after an alcohol-fuelled night out following England’s 38-38 draw with Scotland. It is understood Jones will not take the incident into account when compiling his wider squad to prepare for the tournament in Japan over the coming months.

The Rugby Football Union has insisted the matter has been dealt with internally and though Jones has taken a dim view of similar incidents, sending Manu Tuilagi and Denny Solomona home early from a training camp in August 2017 after a late-night drinking session, Vunipola and Te’o have not jeopardised their places on the plane to Japan.

England do not operate a curfew but team protocol dictates players generally return together. Te’o and Vunipola were out later than the rest of the squad and issued their apologies on Sunday morning. That Jones considers the matter closed will be a relief for the pair, who are expected to feature for Worcester and Saracens respectively on Saturday.

Tuilagi makes his first start for Leicester on Friday since signing a new two-year contract. The 27-year-old, who started all five of England’s Six Nations matches for the first time in his injury-plagued career, had been considering a lucrative offer to join Racing 92. During England’s Six Nations campaign Tuilagi admitted the decision had been weighing heavily on his mind but he opted to stay at Welford Road, confirming his decision days before the draw with Scotland.

1 Six Nations: Ireland v England all you need to know guide
2 Owen Doyle: Day of the jackal may be coming to an end
3 Ireland wary of Peyper calling the tune as they head for Twickenham
4 Andy Farrell ticking all the boxes in advance of England showdown
5 Leinster make eight changes for trip to take on the Ospreys
Real news has value SUBSCRIBE