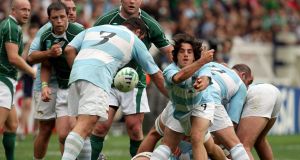 Agustin Pichot in action for Argentina against Ireland at the 2007 Rugby World Cup. Photograph: Morgan Treacy/Inpho

Agustín Pichot is rugby union’s best chance of becoming a truly global game. The former Argentinean scrumhalf is challenging the entire establishment by seeking to be elected World Rugby chairman.

Incumbent chair, Bill Beaumont, has not been in a fight of this magnitude since eye balling Ian ‘Beefy’ Botham in the halcyon days of ‘A Question of Sport.’ The 68-year-old former England lock seemed a safe bet to be re-elected on May 10th, especially with French Federation President Bernard Laporte as his running mate in some old order Churchill-De Gaulle entente.

Now, however, Pichot - a fly in the executive’s ointment these past few years, as Beaumont’s vice chairman, particularly on the three year residency - is campaigning on a “democratic governance” platform.

“At the moment, some of the decisions being made look like an ‘old boys’ club.’”

The 45-year-old faces a monumental task due to the grossly unfair voting system he hopes to smash. Ireland and the other tier one members have three votes each (John O’Driscoll, Phil Orr and Su Carty), Japan have two votes and the rest - Fiji, Georgia etc - have only one. Crucially, the wily Laporte has already wooed many of these people when capturing the 2023 World Cup for France. And Pichot almost certainly lost the tier one majority the moment he uttered: “revenue sharing.”

“I want the Six Nations to make much more money, but I want to redistribute the money in a different way,” he told The Mail on Sunday. “I want investment in new markets and the women’s game.”

Smart guy our Gus. Voting is by secret ballot and WR recently added 16 females to the council.

Pichot is also promising to revolutionise the sport by reviving last year’s Nations Championship idea (the Six Nations crushed it).

“Things were blocked last year but I believe this virus will change people and change the way they do things. I think it could create a revolution in our game because you have to look again at the whole eco-system.”

The Argentine, so far, has no running mate. That will need to change to out manoeuvre Anglo-French collusion.

“Soccer has done it very well. By preserving the club and the international game. Although Lionel Messi earns 20 times the money for Barcelona, he still plays for Argentina in every single championship because it’s meaningful. The club is happy and the country is happy.” Gus Pichot launches his inclusive campaign to become World Rugby chairman

Remember Jonah Lomu, not the giant winger, the Nintendo game? It marked a serious improvement on the Commodore Amiga version. Seemingly, that’s as far as the evolution has come.

The Offload was forced into premature ‘video game’ retirement when a vicious stiletto ended our obsessive relationship with the PS2 circa 2005. Anyway, it seems like rugby has also missed an obvious trick to capture the hearts and minds of coming generations.

Fear not. Gus Pichot to the rescue. Seriously.

“Rugby is old-fashioned in terms of technology,” says the stylish Puma turned rugby politician. “I see my kids today and realise importance of E-sports for the new generations. They play Fortnite, League of Legends, Fifa. All of the established sports markets are connected with digital games and that is a huge means of attracting a younger audience. Fifa 2020, NBA 2K20, NFL Madden.

“Rugby hasn’t had decent game since Jonah Lomu Rugby in 1995, so that would be part of the remit for a dedicated World Rugby innovation department. You need to think about how you approach the modern fan. Young boys and girls. It’s not rocket science.”

To ensure balanced reporting we are willing to consume and discuss Bill Beaumont’s re-election manifesto next week.

Different strokes for different folks. We cannot let the column go without examining how scheduled visitors to Dublin in November are coping with Covid-19.

Ireland has its struggles but they currently reside in the shadow of UK inaction and a horrendous crisis that will only increase our time without sport.

New Zealand are this faraway beacon of prudence but across the Tasman their Aussie mates swing wildly between vicious in-fighting and reckless date-setting to get back playing footy (in the NRL’s case even disregarding the advice of government health officials). Former Munster coach Rob Penney is the latest to lose his job at the NSW Waratahs due to Rugby Australia’s cost slashing measures.

The ever obedient Japanese are still packing tubes to keep working from the office as the coronavirus looms over densely populated Tokyo.

In South Africa people are screaming out for cigarettes and alcohol or even permission to walk the dog amidst a draconian lockdown. We presume a vaccine will need to be discovered before the British and Irish Lions journey down to face the Springboks in July 2021.

World Cup winning captain Siya Kolisi has not been idle. The brilliant flanker has announced the delivery of 1000 face masks for mothers breastfeeding premature babies.

“For those who know me well, you’ll know the important role that women played in my upbringing,” said Kolisi. “When setting up the Kolisi Foundation, it was so important that we focused efforts on supporting women who are going the extra mile for their children.”