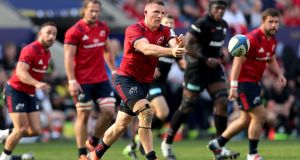 Munster’s Andrew Conway in action against Saracens during the Heineken Champions Cup semi-final at the Ricoh Arena in Coventry in April 2019. Photograph: James Crombie/Inpho

Week three of training in isolation and talking to some of the other lads the novelty of having a wattbike and dumbbells at home is beginning to wear off. This week has been a bit more of a grind.

Even doing my first weights session on Monday I just had to grit my teeth and get through it. Other lads have had that feeling on different days. We’re going to have to be creative in changing it up.

Our S&C guys, Denis Logan and Damien O’Donoghue, are world class. They send us sessions and I’ve been working with our physio, Damien Mordan, a lot over the last few years and he gives me specific exercises. They understand the weird lay of the land at the moment. They give guidelines and we give feedback. Having something to chase is really helpful. Conor Murray sent me on his scores, and I find that motivates me more.

Meanwhile, on Tuesday evening, me and Liz caught up with my parents, Laura and Stephen, and my sisters, Rachel and Lauren, on Face Time. We hadn’t seen my parents since they were in Castleconnell a month ago. They’re both estate agents so they’ve been working from home too, sending on virtual tours of houses to prospective buyers, but it’s hard to replicate their normal work.

They’d gone through a few family pics of us on holidays, which meant they could have a good laugh at my expense. One was of me playing under-6s football for Granada in Holly Park. A gust of wind would have blown me over.

I also played for Park Celtic and St Joseph’s, up front. I was all right. But at around 13 I wasn’t enjoying it as much and stopped. Joey’s were in the DDSL and took it so seriously. I didn’t have the head for it.

From what I remember, playing rugby in Blackrock wasn’t as intense. They have a reputation for being quite full-on but I think that’s unfair. They let young boys enjoy playing whatever sport they want, especially in primary school. That’s my recollection anyway. Some might say differently.

Even in my school days rugby usually came before family or anything else around Easter time. Irish Under-18 and Under-19 matches usually take place around then. I remember playing for the under-18s in Italy in sixth year over Easter, which would explain my terrible Leaving Cert!

We played Wales and were due to play England but they said the pitch failed their health and safety standards. Instead, we mixed our squad with the club who were hosting the tournament and played a full match which was pretty good.

I went straight into the senior squad at Leinster and then Munster, which usually meant matches over Easter as well. This Saturday, Munster were due to play Cardiff at Thomond Park. My parents might have come down to watch the game, stay with us and have breakfast before returning to Dublin.

Last year, Easter clashed with the Heineken Cup semi-final against Saracens in the Ricoh Arena. No happy memories there. My parents were there but after the game they went back to Dublin that night while we went back to Limerick.

Like most sports, rugby comes on heavy at not just Easter, but Christmas as well. Of the three rounds of interpros, you’d usually play in two of them and you might be in for training the other week.

This season was a bonus because those of us at the World Cup had two consecutive weeks off over Christmas. We actually went away for a few days and then had a full week in Dublin and I was able to properly indulge in the festivities for the first time ever.

Most years we’d be playing Leinster on December 26th, or the 27th, at Thomond Park so on Christmas Day myself and Liz would spend a bit of time with her brother Anthony in her mum Dolores’s house in Shankill that morning and then go over to my auntie Rosie’s for the main dinner.

She’s married to Terry Kennedy, who was a winger for St Mary’s and Ireland, and their son Terry jnr is on the Irish Sevens team. Most years we’d be back on the road on Christmas night for the game on the 26th.

Now that we’re in lockdown there will be no visiting family this Easter either, although to add some variety to our schedule this week one of the lads in my Munster training group set us a challenge of kicking a rugby ball into a wheelie bins.

The idea was to be creative. But it had to be recorded. A few of the lads did different things but the reality of Conor Oliver’s recording couldn’t be confirmed and he was disqualified. I went out to the front and attempted to punt the ball over a couple of cars from a good 15 metres away into the bin, with Liz recording it.

After a few attempts I was getting closer and closer before I nailed it. I was delighted with myself. Big celebration too. “I got it,” said Liz.

We put the bin back and went inside to send it to the WhatsApp group. It had been an audacious enough attempt, well executed, and I was well happy.

But it hadn’t been recorded after all.

Now I wasn’t so happy. Touchy times. I was visibly fired up.

I insisted we did it straight away. But there was steam coming out my ears, and it took me at least double if not triple the amount of time. I was about to give up but gave it five more goes and finally it went in.

“I hope so,” said Liz, but you can hear she’s laughing nervously.

She had, thankfully for me and her, and our upcoming marriage.