Adam Griggs: Improving Ireland can compete with the very best 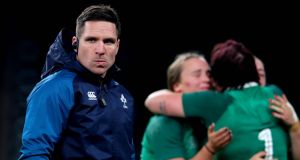 Adam Griggs is obliged to ignore the constraints and instead focus on how he can remotely manage the Ireland Women’s rugby team at a time when coronavirus has cut a swathe through the global sporting calendar. His priority is to ensure that the squad are mentally and physically attuned when the sport resumes as the squad looks forward to a significant challenge later in the year.

The European sectional qualifier for the Women’s 2021 Rugby World Cup is due to take place in September. There is one place available for which Ireland will compete alongside Scotland, Italy and the winner of the Rugby Women’s Europe Championship involving Russia, the Netherlands and Spain.

To prepare Ireland are due to play a number of Tests in late July and early August while also coming together for several training camps, a state of affairs that is predicated on rugby resuming over the next three months or thereabouts. For the time being the squad train as individuals.

Griggs explained: “It is a tricky time for everyone at the moment. Our S&C (Strength & Conditioning) coaches are getting pretty creative and probably earning their money at this point in time. Even doing our reviews now you are giving players feedback on what they have done over the past couple of months but they can’t go and work on that at the moment.

“That’s a tough thing to swallow and frustrating for them. It really is about keeping fitness up at the moment and hopefully we can get through this (pandemic) and the summer is not too disrupted by it all. We would really love be able to fulfil our summer programme, get that (quality) time together which has proven quite worthy for us over the last six months.”

Ireland’s performances in the recent abridged Women’s Six Nations boasted a noticeable improvement on the previous year and included victories over Scotland and Wales, the work of Griggs, his coaching staff and the players finally coming to fruition.

The New Zealander took over the position from Tom Tierney prior to the 2018 Six Nations, making incremental improvements while overseeing some changes in personnel. Having previously coached the Leinster Women’s team - he is also currently a skills coach with the Ireland Women’s Sevens team - he was pretty well versed with what the job would entail.

A scrumhalf during his playing days during which he won an All-Ireland League Division 1A title with Lansdowne in 2015 Griggs conceded that it took him a while to adapt to the specific demands of coaching women’s rugby. He explained: “It’s important thing as a coach to know your players and who you are dealing with because I have found that coming from the men’s game one size doesn’t fit all.

“It’s very much determined by the group that you are working with so that’s probably been the biggest lesson for me to understand my group, what they need and really try and build an environment, a culture around them.

“I have found that when a squad is happy and enjoying the rugby they perform quite well. It’s about knowing your players and what makes them tick, some need an arm around them and others need a good shout at; it’s trying to balance that out has been my biggest learning.”

So too finding the right tone, as Griggs outlined that it was the players’ willingness to challenge him initially that facilitated the development of the group.

“Absolutely, that’s a big thing finding the right voice at certain times. They are driven individuals and when you put them together as a collective they want to be pushed and want to succeed.

“I found that in my first year with the first group, it was about making sure we had a good environment but it wasn’t pushing them as hard as they could have been pushed. So over the last year or two, players have come and gone but we are now at a point where for me, I don’t think it would matter if I was coaching a men’s or women’s team because of the playing group we have.

“They want to be pushed, they’re driven to succeed and if they don’t get that they let you know about it. It’s quite refreshing coaching the women in that regard, that they want the detail, they want to know why they are doing things and if you can’t give them that, you’re found out very quickly. That’s kept me on my toes and helped me along the way, that actually I know I’m just dealing with a group of rugby players that want to be some of the best in the world.”

To facilitate that growth Griggs has had to examine the patterns and playbook that best suits the group in terms of the style of rugby and that too has to be flexible with the change in personnel. He chuckled when asked what his coaching philosophy was, suggesting, “I’m not too sure,” before trying to tease out an answer.

“My philosophy is around having consistent decision makers and really the short answer to that is that it shouldn’t matter what number is on your back apart from set piece time. I want well rounded, skilled players who can make good decisions in the heat of the moment.

“We are really starting to see more of that this year, around some of our play, whether you have Cliodhna Moloney as hooker in the wider channels or it is a winger or fullback (working hard) in a maul. That for me is heads up rugby, trying to play what’s in front of you. We are still working on that.

“I think there are times, I probably dwell on it a little bit because it is our last game against England, but we probably didn’t quite get that right. It came down to not backing our own skill levels enough. There are small windows where we could have used the ball and played a bit more; maybe we went into our shell a little bit.

“Even at half-time in that game, the message was to ‘believe in yourselves.’ England as a world class side deserve respect but (the Irish team) realised at halftime that they (England) are just rugby players with two arms, two legs; they are big and strong but we could still have been in the fight. The more we play a team of that calibre the more the girls will believe.

“We certainly found that when we reflected on it before Christmas. We went to France and spent five days training against the French team, opposed training. That was a real eye opener for the players around a couple of things, the way they prepare, the way they train and then realising when it comes to the game of rugby, it’s 80 minutes and anything can happen.

“We probably need to keep reiterating that to the girls a little bit more that we are good enough to be at this level. We are certainly growing as players and even as a coaching group to where hopefully even in the next year or so we will be even more competitive.”

On a personal level he admitted: “I’ve been able to grow as a coach and it is really satisfying when you see the progression in the players. Last year was a tough for us. You have your own doubts when things aren’t going right, am I doing this right? We are gutted that we weren’t able to finish the (Six Nations) competition off because each week we were getting better and better.

“It’s reassuring as a coach and it’s great to see but at the same time you always want more. Hopefully we can get that coming into the (World Cup) qualifiers.”