Philip Browne: ‘The key is to get the high-value matches played’ 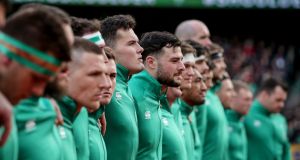 Ireland players might see little or no action with their provinces when rugby returns. Photograph: Dan Sheridan/Inpho 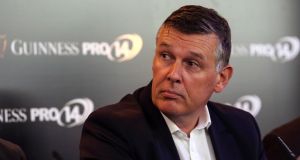 Salvaging as much as possible from the international calendar in 2020 remains the priority of World Rugby and the CEOs of the Tier One nations. Accordingly, leading club and provincial players are likely to become virtually full-time Test players if a much coveted exit strategy from the coronavirus epidemic permits rugby to return in any shape or form this year.

World Rugby CEO Brett Gosper held another video conference with all the Tier One countries last Monday evening, and although the July tours are likely to be postponed by the end of this month, then September, preferably, and October windows are being considered instead.

This is particularly true of Ireland’s two-Test series in Australia, and the cash-strapped ARU’s need for two capacity crowds in Brisbane and Sydney is the most acute of the Tier One nations.

“To a certain extent it’s trying to squeeze a quart into a pint pot,” the IRFU CEO Philip Browne has admitted to The Irish Times. “And therein lies the difficulty, that it requires the co-operation of many to do that. But there’s a greater chance of doing that because everyone’s need is great and everyone understands that we’re going to have to work together to find solutions.

As much as the ARU covet those games against Ireland, so the IRFU need their three November Tests against Australia, Japan and South Africa.

“We’re all interdependent on each other and for us going down to Australia, that’s two guaranteed full houses for the Australian Rugby Union, ” added Browne.

“In the same way, our autumn internationals are important to us and all sorts of scenarios are being looked at, including a block around October and November to complete all the international fixtures. But that all depends on public health restrictions and travel restrictions.”

Shoehorning the July tours, the November tours, the four postponed games from the 2020 Guinness Six Nations (two involving Ireland) and the 2020 Rugby Championship into the last three or four months of the calendar year is just about possible, however optimistic that scenario may appear now.

It also looks more doable for the northern hemisphere countries. Ireland, for example, would thus have to play seven Tests in a relatively short time span, followed by the 2021 Six Nations next February and March, not forgetting a Lions tour to South Africa ending in August 2021.

However, it would be an even bigger strain on the southern hemisphere countries. The Wallabies, for example, would have to compress their 2020 schedule of 11 Tests into a three- or four-month window.

Should this come to pass, the likes of Johnny Sexton, James Ryan, Peter O’Mahony and Iain Henderson would scarcely be seen by their respective provinces until 2021. Before all of that, another complication is squeezing in what are likely to be graded pre-seasons, depending on the gradual lifting of restrictions, after the longest break frontline players have ever known.

As Browne puts it: “It’s easy to press the start button, the harder bit is pressing the restart button and working out exactly how we return to training, then there’s non-contact and contact training, and then return to play. Is it going to be behind closed doors initially? So we’re looking at all those different scenarios.”

Ultimately, though, however much Governments and health authorities might ease social distancing and other restrictions, the last obstacle to be lifted will probably be travel between the southern and northern hemispheres.

“We are all unlikely to come out into a graduated return to normality at the same speed, and that in itself causes potential difficulties,” admitted Browne.

Hence, were both the July and November tours to be called off, another scenario being countenanced is expanding next season’s Six Nations into a 10-match, home and away tournament to be run off either side of Christmas as a means of filling the financial void.

“There’s all sorts of things that you can do,” said Browne. “I wouldn’t rule anything in or anything out. At the end of the day needs must. The better scenario is that we try and fulfil the scheduled fixtures as laid out in the international calendar. That’s the preferable option but it may not be possible to do that. It may be that people will not be allowed to travel between the hemispheres.”

While there is also a real danger that, as Bernard Laporte forewarned the French clubs last Tuesday, there will be no rugby in 2020, Browne maintained: “I’d be more optimistic than that to be honest, and I think sport at the elite end, where you can get teams training again in a controlled environment you can also get playing again, though maybe it has to be behind closed doors. But that’s better than nothing.”