The Offload: the secret is out about Ryan Baird 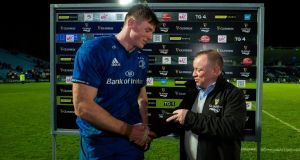 Leinster’s Ryan Baird is presented with the player of the match award after his team’s win against Glasgow. Photograph: Tom O’Hanlon/Inpho

The secret is out about Ryan Baird. A big hint came with his presence, alongside fellow 20-year-old Harry Byrne, at Ireland’s January training camp in Portugal but rumour turned to reality after Friday’s RDS hat-trick.

A modern Leinster pack is formulating before our eyes. Andrew Porter’s career will be elongated by playing second fiddle to Tadhg Furlong at both club and country but the former loosehead may get fed up with the impact role. Ronán Kelleher and Caelan Doris are on the cusp of nailing down starting berths for Ireland. And now James Ryan’s long-term lock partner has emerged.

Talk of Baird covering backrow should be silenced. That department is already bursting at the seams, and with Dan Leavy and Jack Conan still to return, there are too many hunters in the jungle.

Max Deegan’s numbers kept a pace with Baird’s freakish output during the 55-19 destruction of Glasgow. The versatile Deegan went 43 metres off 20 carries, to the young lock’s astonishing 21 runs for 92 metres, about half of them being covered during his brilliant second try.

Leo Cullen, the former six foot six inch lock, dismissed the notion that Baird lacks the height to play at Test level. “He’s definitely six [foot] six [inches] perhaps even six-seven. I think he is taller than me but maybe I am shrinking.”

Most interesting of all, the St Michael’s man – yes, another one – is already calling lineouts. “Back in school I was one of the biggest people and I would have been quite physical,” said Baird. “You come here and you are the smallest guy. It takes time to build up in the gym and get that hardness about you on the pitch so you can physicalise people. Eventually it will just click.” Clearly, it just did.

The number of tries scored by Ryan Baird against Glasgow on Friday night (Dave Kearney also claimed a hat-trick).

What a weird week in Ireland camp; there is no rugby, just uncertainty, as the coronavirus blocks Italy’s visit to Dublin. After such a comprehensive defeat to England at Twickenham, added strain is placed on the group simply because all a player craves is the chance to make amends.

That outlet is temporarily denied to them. In fact, the majority of them may not play a game until Saracens come to Dublin to face Leinster on April 4th (if that fixture even goes ahead).

So, stressful times are here again and since the World Cup in Japan the IRFU have parted ways with sports psychologist Enda McNulty.

“Performance anxiety or stress, I do believe it was really relevant for us before and during the tournament,” said David Nucifora (above) in his World Cup review last December.

“The whole area of psychology has to be improved as well as health and well-being.”

Andy Farrell’s new methods have alleviated the brain overload created by the previous regime’s micromanagement but one of the key issues Nucifora indicated as a root cause for last year’s meltdown has not, apparently, been fully addressed.

Experienced leaders like Peter O’Mahony have spoken about the almost unbearable mental torture leading up to big games.

Nucifora mentioned that it “doesn’t just manifest itself in players but also staff” so the hope is everyone gets properly looked after. Perhaps they choose not to publicise this.

“All public gatherings of more than 5,000 people in a confined space are temporarily banned across France” – French health minister Olivier Veran casts doubt over Ireland’s game in Paris on March 14th.

Two unconnected rugby stories came out last week. What they have in common is neither of them can be easily resolved.

Firstly, World Rugby are to review its policy for transgender participation in the women’s game. “Rugby is unique in that it is the only contact sport for women at the Olympic level,” said Dr Araba Chintoh, psychiatrist and former Canada international, at a transgender workshop in London.

“So, it is not simply ‘what’s the speed difference between a woman and a trans woman?’

“Speed, power, endurance – all of these are combined in a rugby game and we need to be able to understand if there will be any safety challenge with that.”

Secondly, Rugby Australia (RA) CEO Raelene Castle strongly denied that Prayer Group was banned inside the Wallaby squad following the dismissal of Israel Folau for comments about homosexuality and other sinners being bound for hell.

“I’m on public record saying I’m proud of the fact that Israel was a strongly Christian man and was proud of his faith and expressed it as such,” said Castle. “But he made a comment that was insulting.” Apparently, Kepu and Kerevi disagree.