Damian Browne: To the ends of the Earth in search of the ‘savage warrior spirit’ 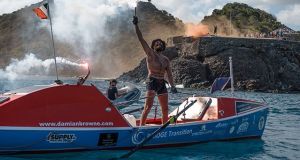 Damian Browne still cannot swim. Rowed the Atlantic on his lonesome, keeps time with Olympians, did a 251km ultra-marathon across the Sahara and the big Galway man was geared to scale Everest when the pandemic took hold of planet Earth, his playground these past five years.

No problem. Browne simply replaced the experience of a lifetime with another. Plans are afoot to recreate Shackleton’s 800 nautical mile voyage from the Antarctic ice shelf to the South Georgia islands – with a unique twist.

But not so much as a doggy paddle.

“I don’t think you want to know how to swim in the Southern Ocean,” he laughs, “you want it over as quickly as possible.”

Browne used to be a rugby player. Sixteen seasons as a heavyweight lock for hire, leaving Connacht to join Northampton in 2004, with Leinster under Joe Schmidt sandwiched between two stints in France: come 2015 he cut the umbilical cord to his professional sport.

Since then he has covered more ground than the great explorers of the early 20th century.

All Browne misses of the game, all he seeks to recreate is the “savage warrior spirit” first discovered in dust ups with Martin Johnson or whichever French enforcer sought him out in local derbies for Brive or Oyonnax.

Most retired athletes need to calm that aggression to reach old age in one piece.

“I find in those primal moments, that ‘savage warrior’ mentality is when I feel most alive, it’s when I grow and learn the most about myself. Getting into these positions is very addictive. It feeds me so much. Expands my mind. Gives me insights not only into myself but into life. It deepens my values and my virtues in a very healthy way. That’s what keeps driving me back in there.”

‘In there’ being high up Carstensz Pyramid where breathing is almost impossible or below giant crashing waves 700km off the west African coast.

There is no specific opponent to grapple anymore. Instead, he seeks out twin companions, solitude and isolation, preferring to look through the window of his own soul.

Living has become about coping in moments when hope disappears. Like the first time his seven-metre long, two-metre wide boat capsized at sea.

“In a very sick way I would have been disappointed if capsizing didn’t happen,” he said of the 2018 transatlantic adventure. “It’s the most gripping part of all the books I’ve read on ocean rows. It’s what kept me reading.”

The first time he was asleep. That is until bashing his head against the cabin as the boat went 180 degrees under water and bobbed up. Blood from the wound and a flooding deck were the immediate dangers. He got to work as heavy clouds gathered.

The second capsize, three hours later, almost proved fatal. He had visualised the moment; seeing the wave rearing up side on, you grab your jackstay lines for dear life.

“Of course that’s not what happened. It was in the middle of a storm. I was standing up on the boat with my back to the wave and I just caught a glimpse of something out of the corner of my right eye. I knew there and then a wave was coming on top of the boat, so I instinctively grabbed a handle behind me. The boat turned over and I went in the water hanging on.”

“I was incredibly calm, everything was in slow motion, serene. But above the water it was f**king crazy so under water was always going to feel calmer. After eight to 10 seconds the boat self-righted and lassoed me around with it.

“It was the most intense moment of my life. Literally felt I was hanging on by my fingernails to existence.”

Recently, friends have linked Browne’s solo Atlantic crossing to the despair many are feeling in their homes.

“When people started saying what is happening at the moment relates to my experiences on the ocean I couldn’t put them together. One is a dream of mine, something I wanted to do on my own, it was never a concern being isolated out on the ocean. What we are all going through is not a dream, nobody wants to be living it, but there are many tools I would have used out on the ocean that are very applicable.

“There were two things that helped me. Having the connection to people with the sat-phone. I’d put it on every evening around 7pm and keep rowing. Just hearing it beeping with text messages was a real treat.

“I never talked to my parents more than when I was out there. I didn’t care how repetitive or banal the conversation was. Even five or 10 minutes was great for getting through the 23 and a half hours I wasn’t talking to anyone.

“I also found a video diary really important. I’d get my thoughts of that day into about seven or eight minutes. I’d blab, I’d vent. That became really cathartic. It was an unexpected coping mechanism while I was out there. I was as honest with myself as I could be. There is something in that for people. It’s better out of your head than bottled up.”

One weakness Browne untangled and straightened into a strength was self-awareness of his inner monologue.

“We can go into this negative conversation with ourselves. Flag that as early as possible. Break the negative chatter. I think that takes years of practice to be aware and bring yourself back to neutral or positive self talk.

“Once you get your head right everything else seems to be grand.”

You can torture yourself with worry.

“Becoming outcome orientated or thinking about things that might never happen, it’s a very human thing to do. It’s about being aware of that and bringing yourself into the present moment. Even if you can’t control the present. That’s the constant battle.”

The adolescent minke whale appeared as a gift from the depths.

“It was in between the two capsizes. After I split my head in the morning and before I hung onto the boat.

“For him to pop up in the middle of it was so bizarre. The entire deck was covered in water so I was panicking: ‘This f**king thing is going to sink.’ I was bucketing off water when I heard the noise.”

Soon the blowhole sound was accompanied by a dorsal fin. The whale circled the boat, eventually slowing to eyeball a man at sea. Browne could have reached out and touched his fellow mammal.

“Making eye contact with a whale is one of those crazy, joyful moments that only Mother Nature can provide.”

There have been other treacherous days on sand, up mountains, at sea. None more so than the first day rowing the Atlantic. The last boat off the block he went flat out only for his body to betray him. Blistered heels, calloused hands with skin torn off, cramped lower limbs worse than on any rugby field and violent stomach retching.

“The winds changed to the front of the boat so I was getting blown backwards. Physically I was in a state. Mentally I was in a very, very bad place after an accumulation of so many mistakes and misfortune.”

Each break for precious sleep was punished by lost miles.

“I was rocked to my core. I saw this whole project that I worked so hard on falling apart. If I am honest, I saw people laughing at me.

“My body shut down. It was my rock for my whole adult life, what I could always rely on. It was a really dark and destructive period. You never forget that. It was so real. So shocking at the time.”

He made a decision that saved his race; rowing non-stop for seven hours. Two rival boats never escaped the low pressure.

“The mistake I made was my body was de-trained from three weeks of inactivity. The 18 months of prep was still there but my mind and body had gone soft from the lack of regular contact with adversity in my training.

“The adrenaline of starting, I just poured out of the blocks and my body wasn’t ready for that.”

None of this hardship conditioned Browne for climbing at altitude.

“It is all well and good to have concentration strategies to bring it back under control but when you are 12 hours on the mountain in a hyperventilating state it is a serious battle. You do get quite negative and doubtful about yourself.”

It becomes about placing one foot in front of the other. Nothing more.

Scaling Everest was to be the sixth summit across seven continents since going up Mount Elbrus in Russia in August 2018. Nepal remains in his dreams but a new course has been charted for late December with Icelandic explorer Fiann Paul.

“I have been invited onto a team of six who are trying to recreate Ernest Shackleton’s famous voyage on the James Caird. We are aiming to be the first manpowered team to ever do it. So, an ocean row in the craziest sea in the world. I am unbelievably excited about it.

“So I hope [the Covid-19 pandemic] dies down in the next few months.”

Rowing the Atlantic, Browne planned to listen to Shackleton’s audio book but couldn’t hear the words above the waves.

1 Worst sporting moment: White knuckle ride on a hate-filled night at Windsor
2 Irish roots with the bit of Jo’burg dog: Curtis Campher has arrived
3 Irish Open confirmed for Galgorm Castle in September
4 Bundini Brown: The man who invented ‘float like a butterfly, sting like a bee’
5 Acute disillusionment the only response to growing FAI debacle
Real news has value SUBSCRIBE

Frankie Dettori to miss York after opting to ride in France this weekend 12:41
Irish Open confirmed for Galgorm Castle in September 12:09
Arsenal complete signing of free agent Willian 10:51
Julian Nagelsmann: ‘we’ll have a beer in the hotel then we focus on PSG’ 10:36
Crusaders game off: New Zealand extends Auckland lockdown 10:17
Crossword Get access to over 6,000 interactive crosswords