Meanwhile, time is ticking for some senior players and could there be an RA coup? 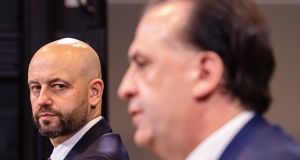 NRL CEO Todd Greenberg reckons there are no bad ideas when it comes to potentially restarting the season. Photo: James Gourley/EPA

“Reprise, le casse-tête (Resumption, the brain teaser)” goes the lead headline in French rugby bible Midi Olympique. There is no Rubik’s cube to finish here. The season is over. We write this with confidence as Irish provinces have our former heroes starting individual pre-seasons this week. “Pre” being the giveaway prefix.

Not the NRL, no siree. Australian Rugby League refuse to bite the bullet with a potential blockbuster movie in the making as they consider a proposal to cocoon all players, coaches, medics and their own camera crews (right there, we envisage a squadron of media drones) on an island off the Queensland coast to sate sponsors and fulfil those multi-million dollar broadcast deals.

Opening scene: one asymptomatic Covid-19 carrier infects the entire flock and, hey presto, we have another human tragedy created by greed to heap on top of Cheltenham and Atletico Madrid at Anfield.

The Larry Vaughn figure – starting from the US President down, there are far too many men comparable to the Amity island mayor from Jaws – in this case could be NRL chief executive Todd Greenberg who stated last week “there were no bad ideas” when it comes to reigniting the 2020 season.

Roll up, roll up for “Project Apollo” – how Rugby League infected its own players at the Tangalooma island resort. Just an hour from Brisbane, folks. Come witness the formation of another field hospital.

“Wouldn’t it be great for Rugby League to be the showpiece around the world and be the first to show the world that it’s the greatest on and off the field and how we can make things happen very very quickly,” said League legend Ben Elias.

All we hear is Mayor Vaughn saying “Amity, as you know, means friendship.”

On the clock: Sexton and LeBron

Time is ticking away for the 30-something athlete. Johnny Sexton cut a forlorn figure in conversation with Ger Gilroy on Off The Ball. The Ireland captain (for one season only, it may turn out) was happy to have some adult conversation. He was not doing much training as strength and conditioning instructions were to treat these weeks as the summer break. He had limited access to his life’s obsession – goal kicking – due to local pitch closures.

The 34-year-old also mentioned the possibility of a “16-month season” and still seems distraught by how Twickenham played out. Sexton was perhaps a little too harsh on himself and, clearly, criticism of his captaincy by Ronan O’Gara still rankles.

Professional sportspeople, in these slow down days, cannot fall back on their process-driven existence. That’s rough. They’ll be fine, of course, but the unknown return is eating into their careers like, well, a virus.

Take the greatest athlete of them all.

“The narrative I don’t like is ‘Well, Lebron he’s 35 he got so much minutes on his body, he got so much rest,’” The LA Lakers mega-star told friends on zoom. “It’s actually the opposite for me because my body, when we stopped playing, was asking me: ‘What the hell are you doing?’ It’s March, why aren’t you getting ready for the play-offs, why are you shutting down right now?’”

“When you are older you de-condition a lot faster,” LeBron added.

These months can never be recovered because, barring something bordering on a miracle, this season is cooked.

The hunt for Raelene Castle

Australian rugby has gone all Lord of the Flies with ex-Wallabies queuing up to take down chief executive Raelene Castle.

“I think the rugby community has lost confidence in the senior executives and the board of Rugby Australia,” said Nick Farr Jones. “There’s no doubt about that.”

Farr Jones went so far as to predict RA will go into administration “in the next fortnight.”

Amidst this media onslaught journalist Peter FitzSimons vocalised what many are thinking: “If you were to measure the antipathy against Raelene Castle, about a half of it in my view is because she is a woman. And there is an inbuilt discrimination – ‘we can’t have a woman running rugby’ – and the other half is the Israel Folau issue.

“She is the one who said ‘Israel, here’s your hat, what’s your hurry, you got to leave.’ In my strong view she had absolutely no choice but to move Israel Folau on but there is enduring resentment from some quarters.”

Ironically, Castle was also lambasted for giving Folau a multi-million dollar contract extension with no controls placed on his social media rants.

What a cataclysmic mess at the very moment cool heads are essential. History will remember how people behave during this time.

“We were saying everyone will come out of this super hardened, like we’ve all been in prison, or really, really round! Are people going to get home tattoos like prison tattoos? These are the sort of conversations you have at 4am on the night shift.” – Former Ireland captain Dr Claire Molloy brings some gallows humour direct from A&E.

0: The amount of times any rational human being wants to hear a rendition of Ireland’s Call during this pandemic.

1 Sideline Cut: Vignette shows why Bird is the true shark in The Last Dance
2 Liverpool and Everton to oppose plans to play games at neutral venues
3 Farrell and O’Connell provide insight into changes in Ireland’s analysis
4 Anfield and Cheltenham show sports again lacking in looking after their own
5 Niyi Adeolokun and Tom McCartney among Connacht departures
Real news has value SUBSCRIBE

HRI announces full jumps programme up to start of August 17:03
La Liga season to restart on June 11th with Sevilla-Real Betis derby 16:26
Liverpool and Everton to oppose plans to play games at neutral venues 17:18
Niyi Adeolokun and Tom McCartney among Connacht departures 13:00
OFI say restrictions should be eased for Irish Olympic hopefuls 10:43
Here is your handy guide to sport on television this week