Schooldays lost to covid-19, word of mouth, by the numbers and George Kruis’s CBD 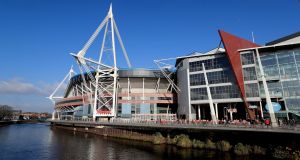 Wales’ Principality Stadium has been converted into a temporary hospital providing around 2,000 additional beds to support the NHS. Photo: Mike Egerton/PA Wire

Around this time last year we were worrying about Ireland’s collapse at The Principality stadium. Now the home of Welsh rugby is a field hospital housing 2,000 much-needed beds in Cardiff city centre. Ulster almost caught Leinster in a titanic European encounter at the Aviva stadium. There probably won’t be any quarter-finals to cheer in 2020. The club season has ended due to a lack of insurance come summer months. Schools finals have been cancelled too.

“I feel for the kids as the schools finals are once in a lifetime for them,” said Geoff Moylan, the Shannon RFC director of rugby, on a brief break from running The Galway Clinic.

As the games disappeared we have turned to sportspeople working in healthcare to tell stories from the frontline (they also speak in war metaphors).

It would be easy to despair (and you probably do at least once a day) but there is always an uplifting voice (like David O’Doherty on Second Captains) to help us climb the stairs or gather twigs in the garden to start a fire (and turn off the heating for a few hours). Yoga studios, gyms and offices are reborn in living rooms.

Rugby is barely mentioned anymore, except during the Saturday night quiz on Zoom or hearing Ian McKinley and Steve Aboud in Italy or Mike Prendergast in Paris describing worse off quarantine situations. Maybe after reading their stories you find enough courage to make that epic trek to Tesco.

However, Japan rugby’s twitter account did pause to mark the six month anniversary of their 19-12 victory over Ireland in Shizuoka. As they should. That game still feels like a ‘did-it-really-happen?’ moment; the smoothness of Jack Carty’s right peg creating early tries for Garry Ringrose and Rob Kearney before a scrum penalty changed the atmosphere inside The Ecopa stadium. We witnessed the energy drain from Irish faces as their jerseys turned a darker shade of green. Back when we believed the worst sport could suffer was a typhoon.

Former Munster winger Johne Murphy’s primary job these days is coaching Newbridge College SCT. Before the virus, his everyday existence was brewing into a special story. The Kildare school was set to contest Senior and Junior Cup finals, beating a mighty St Michael’s College outfit along the way, and making them the first Newbridge side since Geordan Murphy’s in 1996 to reach St Patrick’s Day. And perhaps a first title since Mick Quinn’s team in 1970.

The story will never have a normal or fitting conclusion. Murphy insists the priority is not to reschedule teenage rugby matches – no, that would be the three children under three-years-old downstairs – and he notes the teenagers under his guidance are more concerned about the Leaving Cert going ahead.

“There were people talking to me in shops about it which never happened before in my career,” said Murphy. “People not even connected to the school. There was just a really good vibe within the community of Newbridge about it.”

All cruelly ended by the Covid-19 outbreak.

“We are lucky in that our lads are quite an intelligent, grown-up group,” Murphy adds. “Especially our captain Marcus Kiely. They have accepted their social responsibility to lead their peer group. There’s a huge amount of uncertainty for them, and not just around rugby, but with regards their Leaving Cert as some of the lads wouldn’t be going for athletic scholarships to universities but academic scholarships. We could have a laugh last week about everyone getting 100 percent in their oral. Just one laugh.

“It’s difficult for teenagers to manage the uncertainty but we’ve had one mantra all year – ‘better people, better players’ – to give them a holistic view of what rugby is about on and off the pitch. That is more important now than ever.”

“I would love to just stay at home but, like rugby, my country is calling for me. I have a duty. I just hope people don’t take it for granted, because people die from this. I’ve witnessed it with my own eyes. I have closed (body) bags and everything, it’s really sad. It’s very sad. I know they’re not related to me, but I have cared for them and I’m the last person they see.” – Ireland prop Linda Djougang, speaking to the Irish Independent, works as a nurse in Tallaght Hospital.

21: The amount of days Italy has been in a national lockdown.

‘George Kruis hopes to see medicinal cannabis introduced as an alternative to painkillers to help players cope with the wear and tear caused by the modern game,’ read the Press Association report. This big Saracens and England lock could even be your dealer. Kruis is part-owner of ‘Four Five’ CBD oil company so he obviously believes in the medicinal value marijuana can have on professional athletes. Weed is already widely used by NFL and NBA players with testing not as stringent, although they mostly smoke blunts or eat gummies to relax more than alleviate pain (although that can be the same thing).

“I hope that as professional rugby players we’re not too far off having access to medicinal cannabis as part of it being made available to athletes generally,” said Kruis. “It’s a natural alternative to some of the bits that are out there on the market already. It’s user-led and the push is from patient to doctor and it has a lot of people interested in it.”

And it could move pro sports away from the pill-popping culture that currently exists.

“It’s prescribed as an alternative to painkillers in many countries. Players are calling for it in NFL and there have been some recent changes to what gets flagged in some of their tests.”

A player would need to inhale an industrial amount of herb to test positive in the US, where the plant is already legal in 11 states. Free the weed.