The modern day Celtic rivalry that keeps on giving 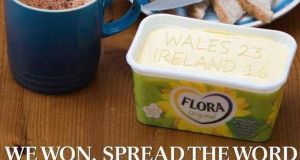 The Western Mail headline after Wales’ win over Ireland in the 2015 Six Nations.

The Irish-Welsh rivalry is probably the most heated and current in the Six Nations. There isn’t the historic backlog but, post-millennium, there’s been bad blood. That’s for sure.

In the past nine years Ireland and Wales have won six of the nine Six Nations Championships, three apiece. Throw in a World Cup quarter-final, and familiarity, at such high stakes, certainly breeds contempt.

“Probably, out of all the teams in the Six Nations, the Welsh players dislike the Irish the most,” Warren Gatland, 2009.

Brian O’Driscoll and Warren Gatland have been the protagonists for much of the rivalry. In 2005 Wales won the Grand Slam, before Gatland’s appointment, with the intense battle between Gavin Henson and O’Driscoll a highlight of that Welsh victory.

Then of course there’s Gatland’s dropping of O’Driscoll for the final test of the 2013 Lions Tour. Gatland certainly isn’t the most popular character in Ireland, sacked of course by the IRFU in 2001, he doesn’t seem too keen on us either.

The rivalry apparently began back in 1914, when the Welsh pack dubbed ‘the terrible eight’, were ‘set upon’ by some of the Irish players in a Belfast theatre. Wales won the ensuing match - remembered as the most violent rugby game ever played.

It’s properly kicked off though in the past decade, with some real crackers between the two Celtic nations. Ireland’s Grand Slam heroics in Cardiff in 2009. The World Cup quarter-final defeat in 2011 - the biggest disappointment of O’Driscoll’s career he says. Highs and lows on either side.

It was at boiling point in 2015 - the Welsh set-up, media and public were irked by pre-match comments made by Keith Wood and in particular Neil Francis. The latter claiming that the then-Welsh coach (Gatland) had “the intellectual properties of a tub of flora”.

Of course after their subsequent victory the Welsh were quick to hit back. The Western Mail running the front page headline: ‘We won spread the word’ accompanied by a tub of flora with the scoreline inscribed. A clever touch.

After that 23-16 victory Gatland was far from gracious, claiming that, “I don’t think Ireland play a lot of rugby.”

“There are certain pundits who just have to Move On from Gatland’s third test Lions selection – especially as it was totally vindicated. The margarine barb was pathetic. We can’t believe you’re not better.”

Ireland of course went on to win the 2015 Six Nations.

Alan Edmunds, Western Mail editor, has explained: “We had hit back at the very personal attack on Warren Gatland by Neil Francis.

“The Flora jibe had infuriated Welsh fans and dominated the build up to the match.

“We hoped the front page would be seen as reasonably witty and little bit clever.

“It went down well on social media, with Welsh supporters at least.”

There’s no Warren Gatland at the helm this week, and the build-up has noticeably been less cutting. But if Wales can pull off a win, don’t be surprised if they have another snare prepared to rub salt in the wounds. The latest chapter in the modern rivalry that keeps on giving.