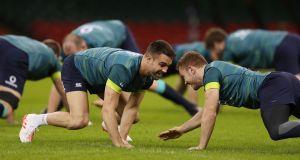 Age: 28. Test Caps: 26 (7 tries) Height: 6’. Weight: 93kg/14st9lbs In the land of scrumhalves Rhys Webb is currently king. And at six foot and almost 15 stone, he’s more powerful than his deceptively stooping frame would have you believe. A horrible ankle injury denied the spinning Bridgend boy the World Cup stage, but he’s recovered to become a genuine rival to Murray’s march towards Lions selection against the All Blacks this summer.

Webb is a quick-tapping, running machine who always maintains a clear support line after putting a massive Welsh forward (or winger) over the gainline.

His feistiness can prove a liability though; the needless penalty for dragging Ali Price against Scotland seemed to cost valuable Wales points, but he possesses a natural speed of thought that will slice through the Irish forwards if their concentration wanes.

Vital statistics: Webb was an 80-minute man in Murrayfield, he was missed for the last 16 minutes against England and took leave in Rome on 73 minutes with the win in the bank.

In this Six Nations he’s kicked less than half Murray’s total (11) and passed only 225 times due to a dramatic dip in Welsh possession but 23 runs for a 117 metre gain is a clear warning to Ireland.

Verdict: The Welsh attack becomes a blunt sword if his blindside probes and quick taps are tracked and snuffed out. Demands a man marker.

Age: 27. Test Caps: 58 (10 tries). Height: 6’2”. Weight: 95kg/14st13lbs. Ireland’s ninth forward brings an essential try scoring threat and box kicking masterclass, allied to the speed of foot and mind to not only make almost every Irish ruck but fire off a rapid pass that enables a charging Robbie Henshaw, a calculating Johnny Sexton or whichever forward careers around the corner to make headway. Paddy Jackson’s competency makes this the only irreplaceable weapon in General Schmidt’s armoury.

Vital statistics: Simple, Murray plays until victory is certain. Kieran Marmion, and a flawed kicking game, was promoted to understudy this season because Eoin Reddan retired and Luke McGrath has yet to add a passing consistency to otherwise impressive performances.

His previous instinct (or instruction) to kick is not evident in this Six Nations (26 times in three matches) with 335 passes and an ever dangerous 19 carries for a 70 metre gain.

Verdict: Ireland’s greatest ever scrumhalf by a country mile, only injury or a tragic dip in form would see Webb, Ben Youngs or Danny Care deny Murray the Lions number nine jersey for the Test series in New Zealand – a country that has produced a regal succession of halfbacks from Sid Going to Justin Marshall to Aaron Smith so they respect, maybe even fear, the man from Patrickswell.

Crazy hype but he’s that important, with a cool demeanour to back it up.