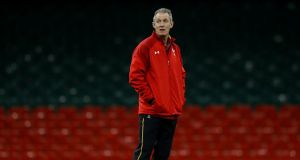 Rob Howley has offered the same squad the chance of redemption against Ireland on Friday night. Photograph: James Crombie/Inpho

Consecutive defeats to England and Scotland have laid waste to Wales’s hopes of mounting a serious Six Nations title challenge.

However Rob Howley’s side have more than just pride to play for when Ireland visit Cardiff on Friday night.

Wales currently lie in seventh place in the IRB world rankings - and defeat to Joe Schmidt’s side at the Millennium Stadium, as well as France in their final fixture - could see them slip out of the top eight.

This would leave the Welsh with lumbered with another ‘pool of death’ at the 2019 Rugby World Cup, four years after they had to negotiate their way out of a group which included Australia and hosts England.

Howley has kept faith with the same squad for Friday night’s showdown under the Millennium roof, offering his 23 a serious shot of redemption against an Ireland side harbouring ambitions of lifting the title.

But the Welsh press seem to think their side have a serious amount of work to do if they are to put a smile back on the face of the national game.

Indeed, ahead of the game Wales Online have rated the two starting line-ups, with Ireland coming out on top 118-112.

Only one Welsh player received a higher mark out of 10 than their Irish counterpart - hooker Ken Owens, who has arguably been the tournament’s standout number two.

They also believe Ireland hold the initiative at halfback, rating Conor Murray ahead of his main rival for the Lions number nine jersey, Rhys Webb.

This keeps in line with a rather negative view being displayed before Friday night’s game, with four of five Wales Online rugby writers believing Schmidt’s side will emerge victorious.

Simon Thomas suggests Ireland’s superior try-scoring record in the Championship - they have crossed the whitewash 13 times to Wales’s five - points towards a win for the visitors.

He writes: “The contrast in attacking potency is stark, while Joe Schmidt - who has orchestrated wins over New Zealand, South Africa and Australia in the past year - has the forwards to take a stranglehold and provide the ammunition for his backs.”

Meanwhile Mark Orders believes the emotional aspect of the fixture - with a packed crowd under the Millennium Stadium roof - won’t be enough to drag Wales over the line.

He writes: “Wales will surf a wave of adrenalin, but Ireland may have the edge in the set-pieces and stronger forward ball-carriers, while they also have a nice blend of power and panache in the backs.”

Ireland’s lack of precision and inventiveness with the ball in hand has proved frustrating at times, however the general consensus among the Welsh media seems to be they have the cutting edge needed to beat Wales.

Anthony Woolford is another who believes Ireland have the cut and thrust to sink the Red Dragon, he writes: “Ireland will have too much pace, power and precision for Wales with the Emerald Isle front-five and impact from the bench being Schmidt’s crown jewels in Cardiff.”

However it is not entirely doom and gloom, with Andy Howell suggesting history tips the tie in Wales’s favour: “The record book suggests it won’t be anything other than another close encounter between two evenly matched teams.

“Wales have a won six, drawn one and lost five record against the Irish since the Warren Gatland-Rob Howley era began nine years ago.

“And, if they aren’t overpowered at forward, can handle the tempo with which Ireland are capable of playing and don’t lose yet another aerial battle, they can make it seven successes.”