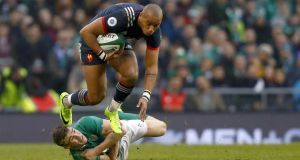 When an outside centre faces a player such as Ben Te’o or injured Manu Tuilagi there is a strong chance that for every ten tackles posed he’ll make 9.

Now at 90 plus percent success rate most coaches would be extremely happy but a problem for an outside centre and notably Ireland’s selection for England next week is that from those very odd missed tackles England will score almost every time. So what a conundrum Joe Schmidt faces.

Will he plump for the ever-improving and ultimately brilliant centre Garry Ringrose or will he select the supremely intelligent, brilliant communicator and excellent defender in Jared Payne? What would you do?

Tonight is a window into the answer with the many big men Wales will send down this channel.

Most top-class games are settled in single scores with defences often the difference. A missed tackle in midfield provides seven points and a loss.

Gael Fickou got around Ringrose once but the French were unable to profit from same; partly because they weren’t clinical enough and partly because of Ireland’s scramble defence where Ringrose and Ireland deserve huge credit in keeping France to no try. Hence defence may be uppermost on Schmidt’s mind in terms of selection.

Defensively, Wales rarely push up both sides of the breakdown and are massively vulnerable to a rewind play. Maybe they’re conditioned to playing the ball the same way and have become lazy on the other side of the ruck. They do however target the breakdown with the added counter ruck to augment their wing forwards jackaling over the ball.

So if Ireland can get a flow with the intent of a midfield breakdown say on the third phase and then attack with the flow, to sell it, one pass open and then rewind, it’ll test the Welsh in not pushing up. To this end, both Welsh props and Samson Lee on the bench don’t have the work rate of Joe Schmidt props and are prone to poor technique around the tackle and breakdown.

Wales do kick off long with a split chase indicating their confidence in defending the width of the pitch so attacking their non-push up side could provide line breaks; but run straight at the Welsh defender and Ireland will get chopped down and knocked back and turned over by their jackals.

All the obvious clichés are relevant but, given that it’s Lions year, Irish caution is required. Regardless of the championship table the Welsh will see many of the Irish as their natural competition for Lions’ places. Hence tonight is a final trial. Watch Rhys Webb at scrumhalf bursting at the seams to usurp Conor Murray; watch out for Webb’s quick tap and go!

I’m surprised Wales are unchanged as their selection has limitations. I wonder how this will influence details such as lineout shot selection. With limited lineout options will Alun Wyn Jones play it ultra-cool in the middle of the lineout with Devin Toner floating around? Will we witness a cleverness at set piece that will enthral?

I do anticipate Wales will shorten their lineout regularly and that they’ll have learned from France and stay on the deck to stop the powerful Irish maul. But they don’t have the lineout athletes which may dictate their tactics; avoid touch; stay on the ground defensively; shorten their lineout attack with off the top their modus operandi; and watch out for Justin Tipuric being hit at the front of the lineout. Don’t worry this is ‘get the ball’ tactic opposed to a threatening ploy and hints at their desperation in sourcing quality lineout ball as Jake Ball is nowhere near the player of Jones’s calibre.

Ross Moriarty starts again in the backrow and was immense against England. But as I’ve been banging on about opensides Josh Van de Flier and Dan Leavy, balance of backrow is one issue where value from same is another. Wales once again go with Sam Warburton and Tipuric on the flanks and Moriarty at eight. Tipuric is so lively and trails all sorts of line breaks but is not as physical as will be needed in the famed Irish ‘one out’ breakdown. So this too may influence Welsh tactics of width over ruck.

This is important as the Irish continually prioritise the ruck and with it the double digit Irish jerseys of outside backs get sucked in making us vulnerable to Welsh execution of our turnovers; which they will get!

Width has always been our Achilles heel and with Tipuric et al even more so. However a meatier Welsh backrow selection would be; Moriarty at six, Taulupe Faletau to start at eight with Warburton at seven.

And what will referee Wayne Barnes think of the evolving scrum battle? Will he have the patience to allow for a competition?

The French were tolerated for the opening scrums but either way when Samson Lee arrives Ireland can gain advantage. On the face of it Ireland have better lineout options and more clever interplays testing defences but Wales have the wonderful Alun Wyn Jones and their two jackals.

So what will we expect from Ireland? Test the Welsh non-pushing up defensive side; minimise penalties to limit Leigh Halfpenny but neutralise Alun Wyn Jones and Ireland will neutralise Wales.