Ireland enter the bear pit for a bare-knuckle ride

Gerry Thornley and Gavin Cummiskey look ahead to Ireland v Wales, where referee Wayne Barnes could potentially have a big say in proceedings. Video: David Dunne 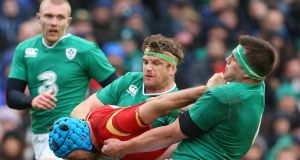 Wales’ Justin Tipuric is tackled by Ireland’s Jamie Heaslip and CJ Stander. The back row battle is likely to prove key in Cardiff. Photograph: Billy Stickland/Inpho

That Ireland have allowed the roof to be enclosed somehow seems apt. For the Welsh, pride is on the line as they seek to avoid a third successive Championship defeat for the first time since 2007, and a first blank at home since 2003, while remaining in the World’s top eight.

For Ireland, the title, and thus setting up a showdown with England eight days hence, is merely all that’s at stake. As the singing and cheering of 74,500 presumably fairly lubricated supporters reverberates around this sweaty and enclosed bearpit, this will be a pressure cooker occasion alright.

Although the Welsh are more familiar with an enclosed roof, Ireland did play four games in such conditions before and during the World Cup last season, so they have been true to their word if the weather was liable to be in any way inclement.

“There was a bit of rain forecast,” Rory Best explained after yesterday’s captain’s run, “and probably Joe asked myself and Johnny first, and when you ask kickers and throwers whether you want to run the risk of it being wet and windy or do they want to take all that out of the equation, make sure it’s dry with minimal wind, I wouldn’t say it was an easy decision, but that was the real reason for us as players.”

Allowing the roof to be closed will intensify the atmosphere, but as Best contended: “When you come to the Principality Stadium you know it’s going to be loud regardless of the roof. Open or closed it’s going to be really, really loud. It’s probably one of the best stadiums in the world, because the atmosphere is just electric.”

“It’s going to be really hard to hear each other,” agreed Best, “but we’re a group that’s been together a long time so you also have to rely on a bit of instinct.”

Hence, there is plenty to be fearful about. History has taught us that pride can be a powerful spur for Welsh sides on home turf in this rugby-mad country. And while Ireland have a good record here, winning five of eight previous visits in the Six Nations, it is often an unpredictable, ‘on the day (or night)’ fixture.

If one takes the Welsh performance against England as a barometer, and as their only previous match at home that seems reasonable, then Ireland can expect their hosts to come out swinging from the kick-off, and even if behind, like a dog with a bone, they are the comeback kings. That 20-0 second-half mauling by Scotland was so, so uncharacteristic, and giving them all a shot at redemption might be a masterstroke.

Then there is the Wayne Barnes factor, and specifically the cautionary tale of two years ago when Barnes’s interpretation of the breakdown saw Leigh Halfpenny kick Wales into a swift 12-0 lead.

“It’s a big one,” said Best, referencing the memory of that game.

“He’s a quality ref, we know what he’s going to deliver. Look, he’s under as much pressure as we are. Certainly myself and Alun Wyn [Jones] will be under pressure to communicate with him but you’ve also got to communicate in the right way.

“When you’re dealing with one of the top referees in the world, he knows his job. I don’t expect him to come and tell me how to throw in. So there’s aspects of I need to be there beside him, but at the same time I don’t need to be telling him how to make every decision, unfortunately.”

Ireland don’t tend to do penultimate fixtures very well, not least when there’s a big prize potentially on offer a week later. They wouldn’t be human if they weren’t aware of the carrot of a shoot-out with England at the Aviva tomorrow week, and if Ireland do win tonight rarely will a Calcutta Cup match be watched on this side of the Irish Sea with such interest.

Given the gulf in Test-match experience at half-back over two weeks ago, the Conor Murray-Johnny Sexton axis was always liable to steer Ireland home. But in Rhys Webb and Dan Biggar, Wales have more proven, international performers. Webb, the dangerman, was a menace against Scotland, and Biggar usually brings his fine all-round game and competitive spirit to bear against Irish sides, whether at provincial or Test level.

Yet Johnny is back. What’s more, after his remarkably assured return to action a fortnight ago against France when staying in the moment and seizing them, Sexton will surely only be better.

The key will probably be the back row battle royal, and how regularly Sean O’Brien, CJ Stander and Jamie Heaslip can get Ireland on the front foot in the face of the big-hitting of Ross Moriarty and co, while also helping to limit Sam Warburton’s strength over the ball and Justin Tipuric’s ball skills in open play.

There’s also an assurance about this Irish pack which suggests they can establish the scrum, lineout, mauling and recycling platform with which to go toe to toe.

But they’ll need to, for sure, as this will be an unrelentingly raucous, riotously, unrelenting physical, bare knuckle ride.