At home, in the midst of song and passion, the red dragon is a very different animal 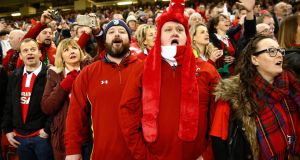 The volume of noise the Welsh supporters can generate is truly staggering. To call it noise is a gross injustice. Photograph: Julian Finney/Getty Images

The volume of noise the Welsh supporters can generate, at what to me will always remain as the Arms Park, is truly staggering. To call it noise is a gross injustice.

It is a harmonious, gargantuan, cathedral of harmony, song, heritage and tradition.

The pre-match singing of the Welsh is one of the great experiences in world sport. I first witnessed it in the early 1980s, while on a playing stint with Swansea Athletic. Richard Moriarty, the future Welsh captain and uncle of the current Welsh backrow Ross Moriarty, was a team-mate and gave me tickets to the Wales against Ireland match in 1985.

I watched in bemusement as an ancient, hunched over man, dressed in top hat, tails and sporting a dragon emblazoned vest, ambled onto the centre of the pitch. He struck a theatrical pose and produced a slender conductor’s baton from somewhere deep inside his garments. He raised his arms, pausing for and getting a dramatic effect. He glanced around the vast colosseum, seeming to make eye contact with every Welsh fan in the house.

I was thinking, “What is this silly old bugger up to?”

When his baton-laden hand dropped and the first lines of the ancient hymn Bread of Heaven hurtled out and engulfed the terraces, I was amazed – like in very few other moments of my rugby life.

Pints in one hand, half-smoked cigarettes in the other – it was the 1980s – every man, women and child knew their harmonic range. The songs were more than religious. They were an expression of nationality, community and the god given love of rugby that makes it so much more than a game to the Welsh.

The hymns sent a message of unity, of a refusal to give in to the adversity of life. The sound expresses an undying hope and belief that they, the Welsh, will overcome whatever may, and prevail. You can’t help but sing along even when, like me, you hit every flat note.

Unlike Ireland, Scotland or England, rugby in Wales was and is the game of the people. From the university-educated to the man digging in the coal pit, rugby gave them hope when their lives had little.

I was there during Margaret Thatcher’s time. The pain inflicted on the local communities because of her government’s policies was shocking to behold. The steel mills and coal pits closed. Families I lived next door to had little food and had to scrap hard to feed to their families. Heating came from coal dropped off trucks at the docks. Life was tough.

Rugby gave the them a distraction to the pain and reminded them, much like the New Zealanders of the 21st century, that when a small country, with a small population, unites behind a cause – rugby is not a game in Wales, it is a cause – it can not only take on the world, it can defeat it.

The Land of Song was smart enough to know that they could intimidate the opposition by encouraging their own team. Positive words from much loved hymns, even when sung by atheists and agnostics with several pints on board, can have a massive effect.

When you break it down and consider that singing traditional hymns at an international rugby match intimidates opposition teams, it is quite bizarre.

Do not be fooled. It is powerful and it does intimidate.

I have witnessed all means of intimidation from crowds. In South Africa our bus was pelted with oranges as it arrived at the ground in northern Pretoria and our warm-up was disrupted by ice throwing drunks.

In Scotland, our warm-up on the back oval at Murrayfield, next to the car park, was disrupted by a rouge Land Rover taking a short cut through our players to get the last parking space.

With the Waratahs in Napier in New Zealand, our team had fireworks explode all around our warm-up drills, sending us staggering away both deaf from the explosions and coughing smoke out of lungs.

In Hamilton, a famous New Zealand band providing the pre-game entertainment, seemingly under the influence of exotic substances, attempted to break into our dressing room in the crucial moments before kick-off in an attempt to get autographs!

In one of my more bizarre moments as a coach, I was literally fighting four fat, drugged up, old musos at the door as the captain was attempting to give a last-minute talk before a Super Rugby match.

The early days of professionalism had a touch of the wild west about them.

But none of this was as intimidating as being pulverised by the glorious sound of the Welsh song. I witnessed several inexperienced new caps mentally shutting down in front of my eyes during the warm-up.

The volume was so massive, communication was impossible. Eyes began to glaze over. Concentration was broken. Focus was lost. Thoughts were on the crowd, not on the task at hand.

The Welsh as a nation are always playing for something more than themselves. They are playing for their village, their community and the creators of song, singing in the stands.

Traditionally the Welsh are not great tourists. Take them out of their familiar surroundings and they struggle.

At home, in the midst of song and passion, the dragon is a very different animal.