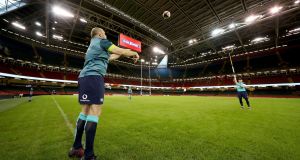 Rory Best insists Ireland will not be stung by any added ferocity of facing Wales under a closed roof in Cardiff on Friday night.

Ireland have agreed to play their Six Nations clash with the Principality Stadium roof shut, and captain Best claims Joe Schmidt’s men are ready for all the ramifications.

Best maintained Ireland were more concerned with ensuring good conditions than fretting over handing their hosts any mental edge generated by the palpably increased crowd noise.

England were stunned by the raucous atmosphere in their 30-3 capitulation to Wales in Cardiff in 2013, but Best remains confident Ireland are prepared for the sensory overload.

“I suppose that we know what the atmosphere in a Wales-Ireland game here is like anyway,” said Best.

“We’ve played here at the World Cup with the roof closed, so we know how loud it’s going to get, the France game was very loud and the quarter-final particularly.

“I suppose you’ll not know until 10.30 tomorrow night whether we were right to agree to have the roof closed or not, but I keep going back to the fact that we want to play in as close to perfect conditions as you can get.

“And closing the roof gives the guarantee of no rain.

“So we felt there were elements of our play against France compromised a bit by the weather.

“That’s the logic behind closing the roof and we are comfortable with that.

“And we are also aware of how loud it’s going to be.

“But roof open or closed this is one of the loudest stadiums around anyway.

“There was a bit of rain forecast and Joe asked myself and Johnny (Sexton) first.

“And when you ask kickers and throwers if they want to take the weather out of the equation, I wouldn’t say it was an easy decision, but that was the real reason for us as players.”

Wales have been left frustrated by Six Nations bosses refusing to amend rules and let all their home games be staged under a closed roof.

The visiting team must continue to agree to shut the stadium roof. But where England refused earlier in the tournament, Ireland have been far less concerned.

And even when the crowd hits its decibel peak on Friday night, Best insisted Ireland will be able to cope.

“We have a plan in place to adapt if we can’t hear each other,” said Best, with Ireland ready to adopt hand signals to replace calls where required.

“But ultimately we feel we can communicate with each other. We can adapt one way or the other.

“Even at the Aviva Stadium when it gets really loud it’s hard to hear each other.

“And when you get through 10 to 12 phases it’s really hard to speak sometimes.

“So sometimes communication goes out the window anyway, and you have to rely on instinct, and how well you know the person beside you.

“When you come to the Principality Stadium you know it’s going to be loud regardless of the roof.

“Open or closed it’s going to be really, really loud.

“It’s probably one of the best stadiums in the world, because the atmosphere is just electric. And on a Friday night I’m sure it will be as good if not better than anything we’ve experienced.”