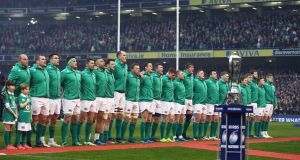 He must be convinced that somewhere there is someone with a voodoo doll and a pin. It’s the only explanation for his misfortune with injury. Wales like to go to Liam Williams in the air - Dan Biggar likes a kick/chase too - a primary dueling point for the Irish fullback.

To get the best out of the Munster player, it’s important to get him the ball in a little space, where his footwork and pace can be destructive, something that his teammates have managed only intermittently to date.

Conjecture about Jared Payne’s return is unlikely to have distracted the gifted young centre. Instead, he will have been focused on making incremental improvements as he has done throughout his six caps.

He remains a key player for Ireland both in attack in getting his team over the gain-line and defence where he will try to be the immoveable object over which the red jerseys will break.

He finds himself in the same position as his fellow Irish wing, in that ball-in-space has been at a premium in two of the three games. This is a high profile head-to-head with George North and he’ll want a fair crack at it.

His mental strength, superb game management and ability to come back sharp after a layoff were features against France and he’ll want to continue that consistence excellence.

Back to his very best against France and has been rightly identified as a key figure by the Welsh along with his halfback partner. The team hums when he hits the right notes.

Ireland’s prowess in the scrum has been an attacking weapon in the tournament and something they hope to continue in this match: a huge work-rate in attack and defence.

Ireland haven’t lost a lineout in their last two games but face a Welsh unit that like to throw Justin Tipuric up at the front where he only requires a single lifter. He leads by example.

Wales have lost three scrums in the tournament to date and this aspect of the game is an obvious place for Ireland to attack them. His carrying has been a feature of a general excellence.

The French match reinforced his super form and also the influence he has on those around him in the pack. He works so hard on behalf of his teammates and that level will be required once again if the visitors are to prevail.

He’s been Ireland’s go-to man in the lineout so far, winning 15 throws and is the only Irish players to steal opposition ball (2). The team need to be organised and accurate on the shorter restarts.

Teams know the quality that he brings in terms of his carrying but still find it difficult to stop him. The odd offload out of, or pass, before the tackle might be a way of putting others into space.

The battle at the breakdown is going to be so important, particularly with Wales opting for two openside flankers. He’ll be one of Ireland’s go to players for gain-line success.

The enduring quality of his performances make him a key player and Ireland may look to move him to the front of the lineout on Welsh ball so they can put one of their jumpers at the tail where Wales have tended to throw.

Glory game sweet solace for Gündogan as he copes with lockdown loneliness 21:30
Harry Maguire unlikely to be summoned to court for appeal in Greece this year 21:20
Gordon Elliott’s horses will be able to race at Cheltenham under new trainer 21:08
Keith Duggan: Bloodlust for Elliott revenge seems shrill and suspect 18:39
Full text of the decision of the IHRB referral hearing into Gordon Elliott 18:21
Crossword Get access to over 6,000 interactive crosswords